Member of the Scientific Council of the BCSSS

During 2017 I accepted an appointment as a Member of the Scientific Council of the Bertalanffy Center for the Study of Systems Science (BCSSS), an Austrian independent research institute, internationally acknowledged as an ambassador for the systems science heritage and present state-of-the-art of applied systems research.
Posted by Ray at 7:26 am No comments:

Bitcoins - boundary judgements re the 'system' are critical

John Quiggin argues in this article that 'Bitcoin mining likely uses more energy than it takes to keep New Zealand's lights on'
Posted by Ray at 7:12 am No comments:

We are happy to inform you that the publication ‘Sustainable Intensification in Smallholder Agriculture: An integrated Systems Research Approach’  - to which you contributed - is now open access.  Please, spread the link further in your networks.
Thank you and kind regards,
Willemien Brooijmans
Posted by Ray at 7:05 am No comments:

The Open University through its platform OpenLearn has a series of free courses called BOCs (Badged Open Courses). Obtaining the badge when successfully completed, this short can be put to a range of purposes: gaining prior credit; continuing professional development etc.

My OU colleague Andy Lane has led the development of a new BOC, now available, called Mastering systems thinking in practice.  It is ideally suited to those who think our OU STiP programme (postgraduate awards in Systems Thinking in Practice) may be relevant but wish to have a taster before committing to full-blown OU study/modules.

I have recently become aware of a thesis completed by Andrew Mitchell at De Montfort University called "Second-order learning in developmental evaluation for community-based sustainability" Here is a copy of the abstract:


ABSTRACT:
"It is increasingly common for complex social, economic and environmental policy concerns to be delivered via funded community-based projects. A project’s contribution is typically monitored and evaluated relative to pre-defined outcomes, supported by a set of indicators. Available research suggests that when judged against such criteria, the performance of many funded international developmental and community-based sustainability (CBS) projects are variable, with evidence suggesting that changes elicited are negligible in duration, type, and scale. However, evaluating project performance relative to pre-defined outcomes may overlook the practical learning accumulated by actors in realising key objectives under conditions afforded by the operational context. To address this gap, developmental evaluation (DE) foregrounds and supports project practitioner learning and innovation under dynamic, complex, and uncertain operating conditions. Applying the DE focus on project actor learning and innovation, the present research thematically analyses how practitioners in a funded CBS case study project make sense of their practice. Despite its explicit focus on learning however, DE has not articulated a coherent cognitive paradigm, and a contribution of the present study is to equip DE with a conceptual architecture drawn from the enactive cognitive science paradigm, rooted in an explicit accounting of complexity.

Using this base, a prototype DE framework was designed and provisionally field-tested in the form of a set of prompts to be used with CBS practitioners to augment traditional monitoring and evaluation activities. This framework is intended to support practitioners in surfacing and capturing second-order learning about their practices and to explore opportunities for innovative responses to dynamic complex operational conditions.

Recommendations are offered for further research and how these findings might be incorporated into future CBS design and funding considerations."

I cannot remember if I have put a link here to the work done by Francis Meynell in his PhD supervised by me and Chris Blackmore. If not here is a link to the only paper published thus far from the thesis.
Posted by Ray at 5:56 am No comments:

Brexit ....news of an encouraging nature

OECD says reversing Brexit would boost Britain’s economy [New European]
The international economic think tank, the OECD, warned in a report last week that a disorderly Brexit without a trade deal would trigger an adverse reaction of financial markets, driving down the pound. It warned that “business investment would seize up” and higher prices would choke off private consumption. However, the OECD analysis found that if there was a decision to halt Brexit, such as by a second referendum, the “positive impact on growth would be significant”.

The zombie ideas that hold so many Brexiteers in their grip [Financial Times]
A powerful article by Martin Wolf in the FT looks at the "zombie" ideas that have taken over the Brexiteers. One such idea is that the UK is in a stronger position than the EU, because it runs a trade deficit with it. Martin points out that, even without the UK, the EU remains the second-largest economy in the world, with an economy almost six times bigger at market prices in 2016: the UK is negotiating with an economic superpower. Another zombie idea is that those who deny the claims of the Brexiteers are “traitors” or “saboteurs” working against “the will of the people”. Martin comments that this is despotism. In a liberal democracy, we are all entitled to our opinions and to seek to overturn what we consider grossly mistaken decisions. The saboteurs are those whose zombie ideas have brought the UK to a ruinous break with its neighbours and natural partners.

Divorce with the EU isn’t inevitable [Guardian]
Some people argue that, because we have triggered Article 50, we are bound to leave the EU. However, Helen Mountfield QC, who was involved in the Gina Miller case, doesn’t agree. She believes that, if we change our mind before March 2019, we can probably stay in the EU legally, through a unilateral decision, without having to ask the European council or the commission or the EU27 for permission. All we have done by triggering Article 50 is tell the EU that we are unhappy and plan to go, but we have not reached the point of no return. Crucially, Parliament has not yet voted to leave the EU: all that the prime minister has done so far is give notice of the current government’s present intention to leave.

The second edition of my 2010 book has just been published.  I expect to see my first printed copy tomorrow.   Various features can be seen from the Springer web pages.  The book or individual chapters can be purchased here. 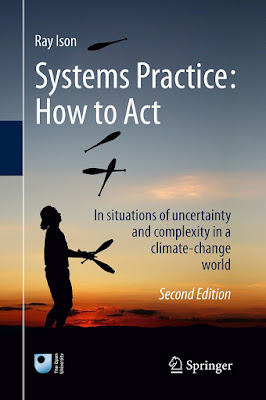 "It is possible to determine which nations and companies are responsible for damaging the climate. It’s only a matter of time before courts decide they must pay for global warming"