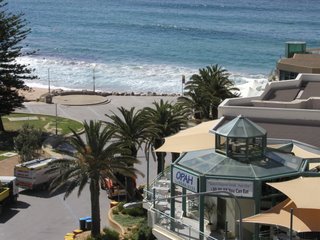 Having a coffee in the lounge at Armidale airport – just off the New England Highway I was confronted with the following:

‘Caution
It is an offence to make jokes about bombs or weapons or leave luggage unattended. Penalties exceed $5,000
Aviation Transport Security Regulation 2005’

Overnight on ABC radio national I heard a programme exploring some of the systemic implications of current Australian legislation, drawing attention to the propensity of parliamentarians to legislate in the face of crisis, as if this were the only form of action open to them. Government is also intervening in what research can be conducted on the subject. This University of NSW site offers more perspectives.

Later from my hotel window at Cronulla Beach in southern Sydney I am invited to consider Gary’s Original Greek Yum Cha, all I can eat for only $30! A good example of cultural fusion? Also a metaphor for the current passion of urban life in Oz– eating and drinking! Obesity is a major problem in Australia. A quick walk around the local shopping centre here at Cronulla reveals every other shop as some form of food or drink outlet.
Posted by Ray at 9:51 am