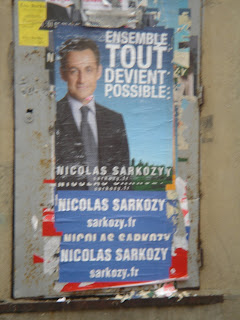 French voters faced with systemic complexity of the voting process

My French friends are in a quandary. Over recent meals these friends and acquaintances have engaged in intense discussions about the problem they face about how to vote. Most would like to vote for Segolene Royal but are even more inclined towards keeping Nicolas Sarkozy out. Basically they do not feel that 'Sego' can beat 'Sarko' if they both make it to the second round of voting. So they struggle with the question of whether to vote for Francois Bayrou in the belief that if he makes it into the second round he will attract enough votes to keep 'Sarko' out! It is an exercise in national second-guessing.

In Avignon at the beginning of Easter all the posters for 'Sarko' had been modified by a graffiti artist - the resultant image was very much like one Herr Hitler. By the end of Easter all these posters had been replaced or covered as in the example here.
Posted by Ray at 2:22 pm