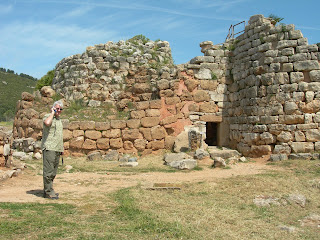 Over the last two months I have had a number of experiences that taken together reveal some interesting questions - for me at least - about our taken-for-granted Western intellectual tradition. They are of interest I suggest for the very reason that our current ways of thinking and acting seem to have put us in a right mess!

At dinner one evening the son of friends related how he was about to begin a politics course. They began, he said, with Plato's 'Republic'. I am not a politics scholar nor have I studied, in any systematic way, ancient history but I had been to the National Archaeological Museum in Athens a few weeks before. In what was an excellent set of displays I had become aware that the classical period of Athens, from which so much of Western Philosophy seems to derive, was only a very brief period. What impressed me more was the archaeological detail from the Cycladian civilisation that had existed in a ring of Island in the Mediterranean from about 3000 to 1100BC. Some of the artwork was deeply moving.

In comparison to the classical period these were 'sustainable civilisations' judged in terms of time. When these civilisations were destroyed, ultimately it is thought, by the massive eruption of Santorini (about 1520 BC) , the world in some ways regressed. Unlike the classical period little survives in written form. This is potent evidence of the power of the pen, so to speak - if one thinks of the power accorded in our intellectual traditions to the classical Greeks, followed by the Romans as well as Hebrew scholars.

So why does politics 101 start with Plato?

Some weeks later I found myself clambering over and amongst the remains of one of the many Nurarghi that can be found in Sardinia. These came from a civilisation, not unlike the Cycladian, which flourished from 1600 to 1000BC. I had seen these on an earlier visit but the patterns that connect were then outside my experience. The art and thus concerns of this civilisation had many features in common with the earlier Cycladians.

I must admit that some of the questions arising from my experiences were not entirely new. Some years before I had read drafts of what has just become 'Origins of Humanness in the Biology of Love' by Humberto Maturana Romesin & Gerda Verden-Zoller (ed. Pille Bunnell) so I was sensitised to these early European civilisations that seemed to flourish without the patriarchy that so typifies the much later Classical Greek and Hebrew traditions. As I understand it though, they suggest that the pre-patriarchal societies had started to wane by about 4500BC.

At this historical moment we need to re-examine and re-invent discourses more in keeping with our circumstances. Being open to different pasts can help in creating different futures. Let's find some different beginnings for politics 101.