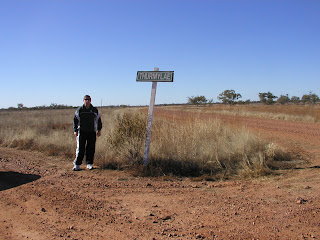 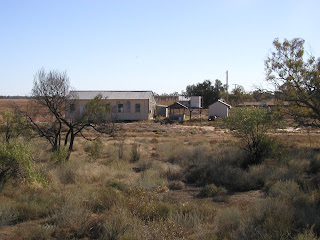 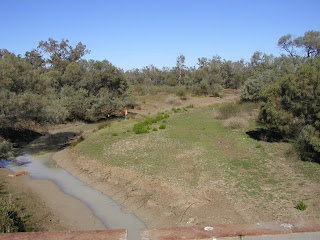 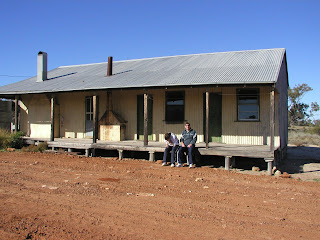 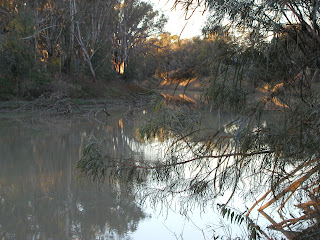 To the back of Bourke: a 'road trip' exploring experiences of 1958

I recently went on what one friend described as a 'road trip' with my brother and nephew. At his invitation I joined them to visit Enngonia, north of Bourke, where he and I had lived in a caravan with our parents for about three months. It was in 1958 when I was six and he was three. This was his first visit to 'Bourke and beyond' since 1958 and the very first for my 13 year old nephew. In contrast I had been back in the early 199os though not to Enngonia.

Nether my brother or I could remember the name of the place where we were camped at Enngonia though I could remember how to get there. I sent an email to the Bourke Shire Council with the following request:

'we are retracing steps that we covered as young boys when our father had road building contracts in the Enngonia and Ford's Bridge areas. For about three months we camped in a caravan with the families of men sub-contracting with trucks to my father, Clive Ison (of Bathurst). This was just outside Enngonia at a shearers quarters/shearing shed complex - one turned right near the hotel and went out just past the race course. We have some photos of that time but very few details or records. '

Within hours the proverbial bush telegraph was functioning. I soon received emails with the following information:

' We think the place you are referring to is called ‘Thurmylae’. It is about 7 miles from the town to the turnoff and you go past the race course to get to it. The road from town to Thurmylae was completed in 1950 and the road extended to Glenalbyn in the later 1950’s. At present it is owned by the Cullen-Ward family. In the 1950’s it was owned by Kate and Richard Egan who would have passed it on to Val and Shirley Egan. Shirley now lives in Dubbo.'

Then from Shirley via her daughter who just happened to work in the Shire office:

'Mum is certain it would have been the Thurmylae huts, a lot of people came and stayed in the 50’s and 60’s. The owner of the property back then was Richard and Kate Egan (mum’s parents), they then handed the property Val and Shirley Egan. The Current owner is Mick Cullenward.'

They were right. It was Thurmylae as can be seen from the then and now photos. It was good to return but of course it seemed much diminished to that experienced through six year old eyes. Where there was once one station the need to remain viable, meant there were now three amalgamated into one. The racecourse still functioned - the annual picnic races were the weekend after our visit. It would on one day transform a sleepy village into a vibrant centre of far west social life ..at least for some of the inhabitants. On the road back into town travellers are greeted with the sign: 'Slow down. Drop your dust before entering the town'!

I am not sure where the name of the property came from. There are records in 1895 for

I used memories of my time in the area in 1958 to open a chapter I wrote for our book 'Agricultural Extension and Rural Development. Breaking out of Knowledge Transfer Traditions'. Our visit brought these back and exposed more - highlighting the importance of context, particularly place, in our ways of knowing. Here is the extract:

West of the Darling where crows fly backwards
'I had not been to the Western Division of New South Wales since I was seven. At that time we were camped near Enngonia, north-west of Bourke where my father was building roads and sinking tanks, large earthen dams, with his dozer and truck and aided by a group of sub-contractors. We were camped in a cluster of caravans around a local shearing shed. I remember stories of mythical shearer's cooks and other characters of the sheds - but no stories of the road builders or tank sinkers. And our pet kangaroo, a baby or joey, the result of an evenings spotlight hunting, an event both enthralling and appalling to a young boy. Also the moving sea of kangaroos that we regularly encountered on the racetrack on our way to town. The only green grass for miles. The Enngonia pub, since burnt down [1959], was the social centre of the district. Its verandah was designed for the dangling legs of a boy, on the edge, ever eager to be part of an adult world. It provided a vantage point for watching every detail over a sarsaparilla and lemonade. Some events moved me from my vantage point - it was around the back for the pig's demise and transformation into ham: the sharp squeal, the blooding, the boiling water, razor sharp knife and scraping. It was a time of good humour; we had a 1927 Overland car, something of an antique even then but at a time when "antique" meant "old". In other words we could afford no better. We suffered the dust and corrugations of the unpaved roads. The car had to be hand cranked. Experiences were always filtered by the context; distance, dust and with rain, the thick mud which clung to boots, made it impossible for small boys to lift their shoes and for vehicles to move. Rain and mud gave yet another meaning to distance. Our research project in the Western Division, and planned visit, drew these memories to the surface and shaped my anticipation. We were concerned with the so called "failure of graziers to adopt technology" which had been developed by research funded partly with their money. This was a major concern of researchers and extension people, particularly in the local NSW Department of Agriculture. This explained the location of our project. As a group of researchers we had been critical of much of what had been done in agricultural R&D because, as with much of science, it was conducted out of context. We felt it necessary therefore to immerse ourselves in the context of the semi-arid rangelands, where our research was to be conducted. This explained my presence on Murtamena station, not far from Wilcannia, early in December 1990. It was over thirty years since I had been west of the Darling or into "the outback".

The photos are (i) the entrance to Thurmylae off the Enngonia to Walget Road; (ii) what is left of the old shearing complex; (iii) the Warrego River just outside Enngonia; (iv) sitting on the shearer's hut veranadah; (v) the Darling River at Bourke - water held back by the local weir.
Posted by Ray at 2:39 pm