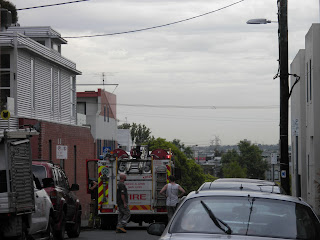 A few weeks earlier, on an even hotter day when my family and I were returning from Adelaide, the implications of power line failure in contexts of weather extremes became even more apparent.  As explained in this opinion piece published in the Adelaide Advertiser, based on an article written by my daughter on that very trip, electricity authorities are being forced to close down whole grid systems in periods of extremes, particularly where bushfires might ensue.  The end result is a community potentially subjected to life threatening heat stress.  As pointed out there is a need for institutional and technological innovation to break out of this trap.  It need not be expensive, but it does involve challenging the thinking and corporate interests that dismiss arguements for investing in more locally resilient power/energy systems.
Posted by Ray at 12:56 pm