My 2010 book Systems Practice. How to Act in a Climate-Change World (Springer and The Open University) has just been reviewed by Howard Silverman in the journal Ecopsychology. His review is replete with understanding. The first page is available on open access.

Howard opens his review with:

"The surest view into Ray Ison’s perspective on systems practice, as described in his 2010 book Systems Practice: How to Act in a Climate-Change World, begins with his definition of a system. Ison cites a four-part formulation developed at the Open University, where he is Professor in Systems:
This might seem like boilerplate stuff, but that’s only partially correct. Compare it for example with Ludwig von Bertalanffy’s definition: an entity that maintains its existence through the mutual interaction of its parts (Davidson, 1983). Or Donella Meadows’ in the book Thinking in Systems: a set of things, interconnected in such a way that they produce their own pattern of behavior over time (Meadows, 2008). Or one based on the three properties laid out by Russell Ackoff in Redesigning the Future: a whole, consisting of parts that can interdependently affect the behavior or properties of the whole (Ackoff, 1974).

Three aspects of systems—elements, interactions, and identity or behavior or purpose—are cited by each of the three systems luminaries. The Open University formulation includes these three aspects and also a fourth: point of view.  This top-line emphasis on point of view recalls a diagram by two additional luminaries, Margaret Mead and Gregory Bateson. In it, they describe two perspectives on systems—first-order and second order cybernetics—distinguished by whether or not one sees oneself as a participant in the system under examination.."

"What becomes apparent on reading is that, in Ison’s perspective on systems thinking and practice, the functionalist impulses that have dominated the systems field are held in check. He elaborates on acting in a climate-change world without mention of international protocols or planetary boundaries or stabilization wedges. He criticizes target-based management without reference to that favorite target of environmentalists: 350. For better or worse, the reader is left to contemplate the broader applications and implications of Ison’s approach. Yet for anyone interested in what the systems field might contribute to a reflexive understanding of situational inquiry and engagement, there is hardly a better book with which to start."

"As the ‘wicked’ and ‘messy’ nature of contemporary problems becomes increasingly apparent, the need to better understand and appropriately engage with the complex systems we are part of is of growing importance. Systems Practice: How to Act in a Climate Change World is rich in insight into the challenges and joys of developing this was of thinking and acting. It is itself a highly valuable but challenging book, in part because of the depth of the problems in modern society it reveals (including, for example, the very concept of ‘problems’, with its implicit simplistic corollary: ‘solutions’). It is also challenging because of the richness of strategies it provides for engaging with these ‘problems’ and becoming a ‘systems practitioner’... Its breadth and depth of thinking is stimulating and the intellectual and emotional challenges it poses reflect the situations we are in rather than weaknesses with the book itself, which is instead carefully and cleverly crafted." 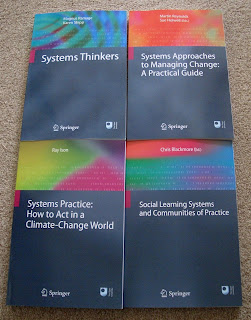