The infestation of native vegetation by exotic weeds is a major systemic problem to many.  It is a global phenomenon associated with human-induced spread of species from one country or habitat to another as well as spread via other mechanisms. Some of the perceived problems have been many years in the making.  The Ngorongoro Crater and conservation area is not immune to this issue as the photos below testify. 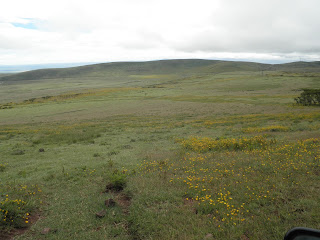 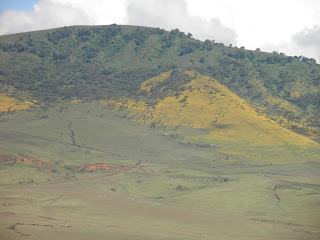 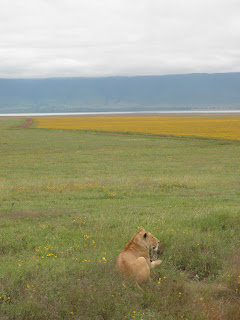 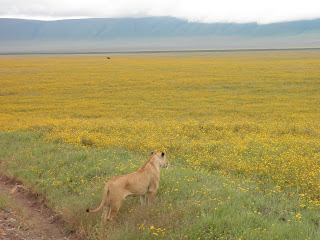 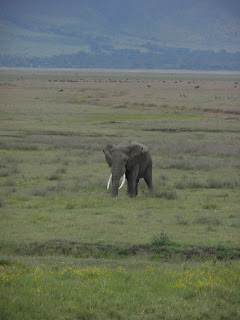 Visually the main weed species during our visit was yellow flowered (see photos above) with a purpleish-flowered species seemingly problematic in some other areas (see photo with bull elephant). Whilst we were there staff were slashing the yellow weed - as can be seen from the boundary between the slashed and unslashed area in the photo with the lioness.

Despite time spent searching on the web I have not been able to put a name to these two species. I wonder why? Our guide did not know their names either.  Thus I cannot say anything about their rate of spread, seriousness or whether slashing actually works in the long term. As with all attempts at control of weed species it is likely to be expensive.

The species in the photos are clearly not the only ones of concern.  In the past Mexican Poppy (Argemone mexicana) has also been a problem as this World Heritage Site Report affirms:

" a prescribed burning programme has been put in place to reduce the spread of invasive weeds, with 400 ha successfully burnt in September 2005. A combination of manual removal, mowing and burning has also been applied to areas infested by the Mexican Poppy which is now reported to be eradicated from the Crater."

There was the odd poppy plant about but it seemed far from a major problem....so perhaps a success story?

Australia has its share of exotic weed 'problems' for which traditional approaches to improvement seem inadequate as this recent paper reports in relation to the weed serrated tussock. These researchers highlight:
Research such as this suggests that co-management models of weed problems in the Ngorongoro Conservation area are likely to be worth pursuing....if they are not already being done.