Postcard from China 2
One of the most inescapable features of this visit for me was the air pollution. Not only was it in Beijing with its 21 million people but also in Chengdu (14 million), and to a lesser extent Xi'an (7 million).  However the most disturbing experience was at the Three Gorges Dam and in the Yangtze River Valley upstream.  It also had its amusing side.  We were taken to the main viewing platform for the dam wall, but like all tourists that day there was no wall to be seen. The smog was too thick.  As ever technology saved us!  We left with an excellent photo of ourselves with the dam wall clearly visible in the background all thanks to photoshop (or some such similar program)! 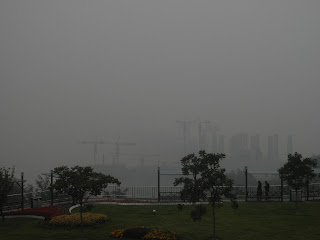 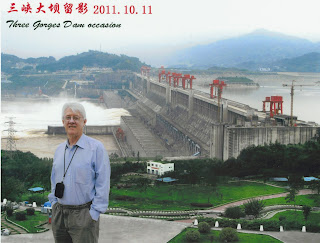 In the Global Times of the 3rd October a report entitled 'gloomy outlook for pollution targets' gives some background to what we were experiencing.  According to the article the first six months of this year had seen a 6.17% rise in nitrogen oxides released into the atmosphere compared with the previous year.  The official target is for a 1.5 percent reduction in 2011!  Of course this is an average - how was it calculated?  The article does not make that clear, but the rise is likely to have been much, much higher in some places.  As the article says "nitrogen emissions, which are a major cause of acid rain and smog, are harmful to the human respiratory system and can cause cardiovascular disease."

Before leaving for China I had been writing up some of the history of my own family in Hackney and Bethnal Green, now suburbs of London.   London was the first mega city. It had major pollution problems which began in the 1830s and 1840s as industrialisation progressed.  The effects of pollution was probably one of the reasons my ancestors emigrated to Australia.  As we travelled through China I could not help but wonder when and how the Chinese will turn the corner on air pollution in the face of ever growing cities, increasing car numbers, industrial development and frequent inversion layers over cities. 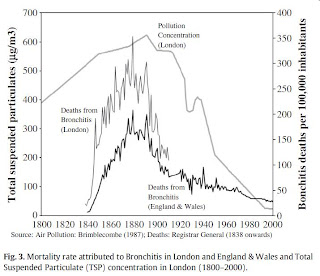 A timely paper in the journal Ecological Economics makes apparent the situation in London that my ancestors had encountered. This figure (courtesy of David Pannell and the author) shows that London did not start to turn the corner, to reduce pollution, till about 1900.  There was an almost 80 year period before things started to get better. As the graph shows incidence of deaths due to bronchitis peaked at about the same time as pollution (total suspended particles).  The challenge for China is to devise strategies to turn the corner.  Nitrogen oxides come mainly from cars and coal-fired thermal power plants.  Apparently nitrogen oxides now excede sulfur dioxide as the major pollutant of air, and thus of acid rain.  This is a classic systemic problem as nitrogen oxide and ammonia (which comes mainly from animal waste and garbage) accumulate in the water which, according to the article 'is the most serious pollution problem in China'.

I cannot help but consider what might have happened for China, and the rest of the world, had Deng Xiaoping, the reformer who led China towards a market-based economy, and his contemporaries not bought in to the failing western economic model.  The environmental externalities of car-based economic development - in terms of pollution, congestion and the transformation of identity (consumerism and mobility) - were already well known when reforms began. This is not to say that China should have remained static - but another pathway was already apparent, and if pursued may have left us all in a better position.  That said it may be that China will pull something out of the hat and follow the trajectory achieved by London over a century ago.  If so we will all benefit.  At the moment I am not optimistic. 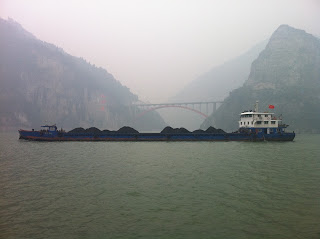 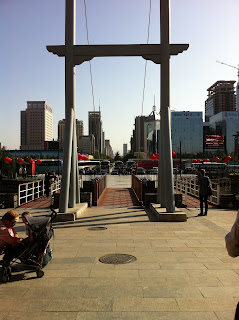 There have of course been both substantial critiques as well as champions of China's chosen pathway. Writing in 1997 Joshua Muldavin analyzed environmental degradation in rural China as structurally embedded in China's rapid economic growth in the post-Mao era. He wrote:

"A critical assessment of the Chinese hybrid economy challenges standard views of the reforms. The overall environmental problems of state socialist agriculture in China have been aggravated following the agrarian reforms of the current regime. Rather than mitigating negative trends, marketization and privatization have brought new, qualitatively different, environmental problems. Resource decline and its attendant social problems are not limited to aspects of transitional economy but are a fundamental part of the new hybrid system."

There are still about 860 million rural inhabitants of China.  What their fate is to be is uncertain. 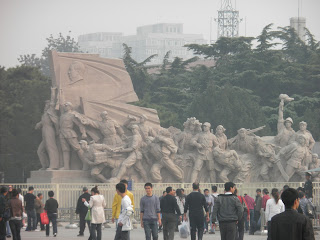 In a remarkably frank interview in the same issue of Global Times, Huang Nbo, a business tycoon (China's 161st richest man) who has just purchased 300 square km of Iceland (and former official in the Publicity Department of the Communist Party of  China Central Committee), comments on business ethics and the current pathway. He said:

" I think moral ambiguity is overwhelming...   ...I have a sense of guilt accumulated over the years over the inevitable immorality in business transactions, including the damage we cause to the environment and forcing people out of their homes to give way for real estate development.  We achieved development, but it was done through brutal means."

I felt pensive as I returned to Australia  - then saddened when flying into Tullamarine to be greeted by an inversion layer and a discernable smog haze over Melbourne.  Members of the Committee for Melbourne who advocate for a city of 10 million people ought to travel to China and learn from the situation there, before it is too late.
Posted by Ray at 8:45 am