Our Australian Water Culture Delegation was sponsored by the Australia-China Council, Department of Foreign Affairs and Trade, Australia, through the project Linking Australia and China - a "Bridge of Water Culture". The hosting organizations were the Institute of Geographic Sciences and Natural Resources Research, Chinese Academy of Sciences (IGSNRR), the China Three Gorges Corporation (CTGPC) and the Shaanxi Normal University in Xi'an.  We had a packed but informative schedule. Our hosts received us with great warmth and hospitality at each venue. 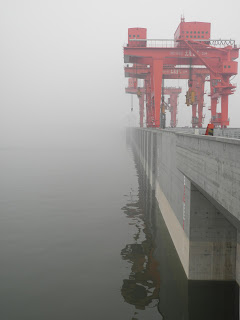 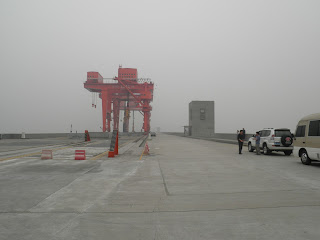 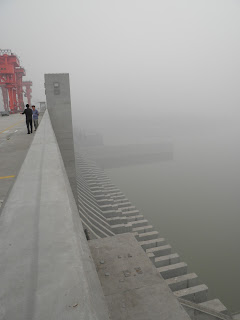 The Three Gorges Dam is a mammoth undertaking and a major feat of engineering. It is the largest dam of its type in the world.  The Yangtze River, which once flowed at an average depth of 10m, now stands at 135 m at the dam wall.  The water backs up 650km to the city of Chongqing, one of the four provincial level cities in China (with Beijing, Tianjin and Shanghai). As is well known it is also highly controversial.  We were shown good evidence of significant flood control, at least 10 times in the period 2004-10, with significant downstream flooding averted particularly in 2010. 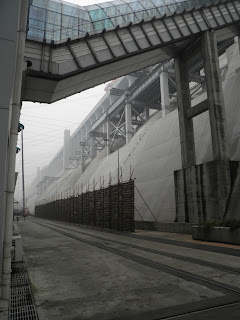 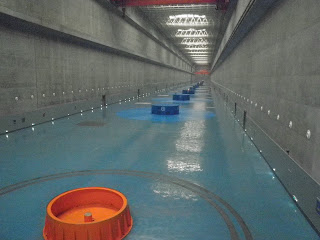 The dam contains 33 turbines producing hydro-power.  The data for CO2 emission reductions  and tonnes of coal saved are impressive as are enhanced river transport efficiencies.  In other words the dam is clearly delivering certain social and economic benefits. Having met Academican Lu Youmei, one of the driving forces behind the dam, and the first CEO of CTGPC, I can appreciate that the dam was the outcome of a long political process within the Party.  When modernisation won out the dam was inevitable; it is symbolic of China's chosen pathway over the last 30 years. That said, Lu Youmei and current Vice Chairman Fan Qixiang, clearly appreciate the range of systemic difficulties that lay ahead.  I will turn to some of these in a moment.  What is not clear however, is whether having developed world's best expertise in what they do, CTGPC will follow the path of another engineering company that started by building dams, namely the Australian Snowy Mountains Engineering Corporation (SMEC).  Experience suggests that such companies actively pursue opportunities to conserve and further develop their existing expertise. They move from the work of building a system in response to a problem to looking for a problem to retain the system they have built! CTGPC is currently constructing further dams on the Jinsha River, an upstream tributary of the Yangtze.  They aim to have four new dams completed in 10 years. These will have double the current power generating capacity of the Three Gorges Dam. Around 300,000 people will be affected - many fewer than the 1.2-3 million affected by the Three Gorges Project.  Over lunch I learned that CTGPC were in discussions in over 30 countries about possible hydro opportunities.  I expect these include countries along the Mekong and in Burma. 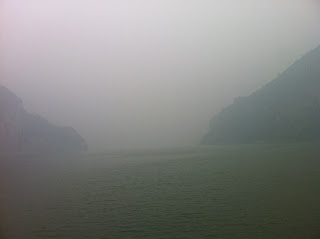 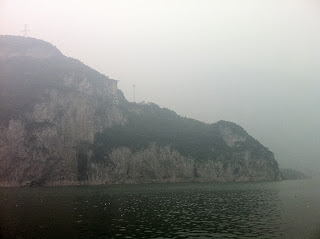 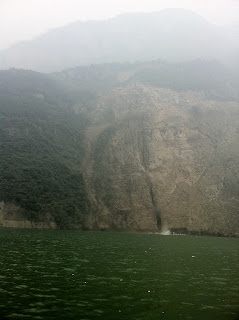 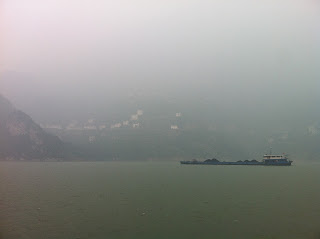 On a cruise up the river from the dam some of the issues that confront CTGPC, as managers of the dam, became apparent.  The rise in water levels has, in places, undermined the steep walls of the valley.  We saw work actively trying to avoid landslips, and thus added siltation. After impoundment of water a number of seismic events were triggered.  There is substantial investment in seismic monitoring.  Water qualty is also clearly an issue.  A colleague counted hundreds of floating shoes and thongs on our relatively short boat journey.  But it is probably what cannot be seen that is more of a worry.  It was reported that water quality was generally level 2 or 3, but I failed to find out what this really meant.

Water quality is a much wider problem than that in the Three Gorges Dam.  In fact, along with water availability, it is probably the main environmental problem in China today.  The China Daily of October 15-16 reports that:
"China has only a quarter of the world's average in terms of fresh water resources, ranking 110th in the world. Among 600 Chinese cities, more than 400 suffer from an insufficiency of water, 110 seriously, including some along the Yangtze River, the country's longest river.  Worse the decades-long rapid economic growth means the country's limited water resources are increasingly threatened by pollution. Statistics show that more than 70 percent of China's rivers and 60 percent of its underground water resources are polluted to different degrees."

The complexities of the water issues facing China can be gleaned from the issues now facing CTGPC. These include the extensive diffuse pollution coming from agriculture (nitrogen and phosphorus mainly), sewage from the many upstream cities, towns and villages and of course, industrial pollution and acid rain.  Given the size of the overall river system upstream from the dam this is a massive issue with many siloed ministries involved, meaning that concerted action amongst the many stakeholders is difficult to achieve.  Algal blooms have increased in the dams. We heard little about other organisms and invertebrates in the river system other than some substantial breeding and preservation actions.  There is a Yangtze River Commission which in theory has oversight but in our various conversations the governance of rivers consistently emerged as a major issue - not only within river basins but between river basins. Clearly more systemic and adapative water governance is needed as CTGPC are finding - they now have to deal with 5-6 other "owners" of upstream dams and power generators i.e., they are not the sole provider on the Yangtze. 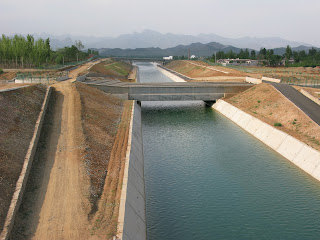 Having seen on my last visit the massive south-north canal that transfers water from the wetter south to the drier north, including Beijing, I was surprised to discover that it is not linked to the Three Gorges Dam, but another relatively minor tributary of the Yangtze which enters downstream of the dam (if there is any water left, that is!). China's second most important river, the Yellow River, only has one twentieth of the the water resources of the Yangtze.  Alarmingly much of the water in the Yellow and Hai River (further north) is used before they get to the sea i.e., current levels of demand are not sustainable.  Part of  China's predicament was explained by Lu Youmei.  The high rainfall period in the Yangtze is in the summer, and this is also the time of maximum flood risk - currently 950 million cubic m of run-off enters the sea from the Yangtze.  Unfortunatly, some view this as lost water!   At the moment, and for the forseeable future, there is unlikely to be enough storage capacity to save more water in the period of excess whilst at the same time fulfill flood mitigation responsibilities.  The corollary to this is that in winter, flows are low and power generation is generally well below peak capacity.  It is also dangerous for the Yangtze river itself, and associated river traffic, to transfer too much water in winter.  For example, the Yangtze currently has a very low flow so only 13 turbines were operating during our visit. 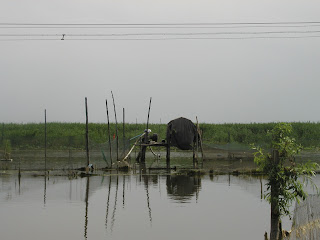 Another major problem in China is groundwater depletion as well as contamination.  I was well aware of this from our prevous research visit spent on the North China Plain in Hebei Province around Lake Baiyangdian. In fact the long term scenario for water in this vital breadbasket of China is very worrying. A telling example of the issue became apparent in our visit to Xi'an.  One of the cultural and thus tourist landmarks is the Big Wild Goose Pagoda.  During our visit the guide advised us against climbing it as it had begun to lean, much as the Leaning Tower of Pisa, because of the falling water table under the city of Xi'an.  I hope the spectacular 'dancing water fountains', newly installed nearby, were not exacerbating the problem as they were clearly a great civic amenity. 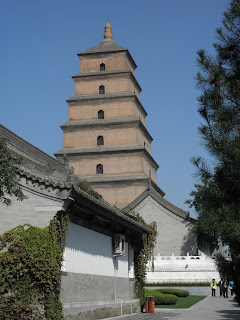 In the 12th Five Year Plan period (2011-15) China has vowed to address the water issues.  The report in the China Daily cited earlier describes this as a 'determination to bring the country's fast gowing economy onto a more sustainable and greener track'.  The governament is demanding that 'water usage for every 10,000 yuan-worth [of] GDP be reduced 50 percent by 2020 from the 2008 level and an additional 40 percent after 2020.'  In this same article Beijing is held up as an example that others might follow: 'Coupled with a considerable decline in energy intensity, the water consumption for every 10,000 yuan of GDP in the capital has declined considerably [how is not specified], decreasing to 24.9 cubic meters in 2010 from 49.5 cubic meters in 2005.'  These are policy developments that should be welcomed, but are they enough?  How will they be enforced?   The same article ends by stating that: ' To ensure the 100 percent realization of the national energy and water saving targets mapped out, the country should hold accountable officials whose regions fail to attain these targets and lay down a set of strict punishment measures'!  In future provinces that use more water than they are allocated will be penalised.

The policy response by China is ambitious, but is it too much a captive of  concepts such as eco-efficieny? Improving the environmental performance of a single car ultimately achieves little if the rate in the overall growth of cars means that all gains per car are overwhelmed by gross outputs.  The same arguments can be applied to the metric of water savings per unit of GDP.  Already China appears to be approaching CO2 outputs per capita similar to the main developing countries.  Now is not the time for reform - change that makes the wrong strategy more efficient - rather it is time for transformation - invention that creates the right thing to do in the circumstances.
Posted by Ray at 9:08 am