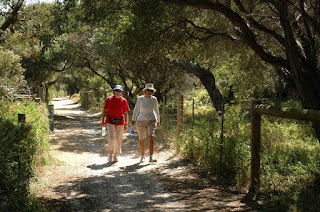 Caption:  The Seaford foreshore - nature in the city.  Over forty-thousand people live within 15 driving or walking minutes of the Seaford foreshore and beach.   City creeks, reserves and landscapes managed by Councils, communities, Melbourne Water and Parks Victoria may not be wilderness with threatened species but 4.5 million Melbournians need natural places like this for physical and mental health and well-being.

The Port Philip and Westernport CMA (PPW Catchment Management Authority) recently made this Facebook posting.  It draws on work in which some of their staff are involved being conducted under the aegis of the Lonsdale Systems Group's designed and facilitated collaborative, systemic, inquiry into NRM governance in Victoria.

DOES NATURE MATTER TO PEOPLE IN URBAN MELBOURNE?
Social science and intuition agree - contact with nature is critical to the health and well-being of over 15 million city Australians.

A new Victorian Biodiversity Strategy is being made.  A draft will be released soon and it’s an opportunity for change.  The PPWCMA’s Regional Strategy Team and Living Links Coordinator are working with council and community leaders and the Department of Environment, Land, Water & Planning to help the new Biodiversity Strategy better recognise urban community needs and connections with nature.

The PPWCMA’s Regional Strategy Team is also consulting with its partners on a written response to the Draft Biodiversity Strategy.  The response will focus on the importance  of urban nature conservation and the value of its partners’ work to keep nature alive and well in the city.

Does nature matter to people in urban Melbourne?  Yes!
Posted by Ray at 6:52 pm