Another arrival in Melbourne, planned for September is Tom Bentley, former head of thinktank DEMOS. His pending arrival has already been the subject of media coverage: The Melbourne Age byline was: 'Former Blair 'policy wonk' to advise Bracks'. (For those unfamiliar with Australian politics Steve Bracks is Premier of the state of Victoria). The article advises that: 'He will do two jobs in Melbourne: working in the Premier's Department three days a week and teaching for the other two at Melbourne University's Australia and New Zealand School of Government. He follows Geoff Mulgan, former head of the Blair Government's strategy unit, in taking a post at the school.'

Tom, whilst at DEMOS, fostered the publication of 'System Failure' by Jake Chapman. This in turn has lead to an Open University short course based on 'System Failure' called 'Making Policies Work'.

Both Tom and Geoff Mulgan, amongst their many other achievements, have given well-recieved presentations to Systems Practice for Managing Complexity (SPMC) Network conferences.
Posted by Ray at 9:03 am No comments: 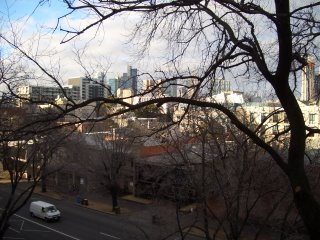 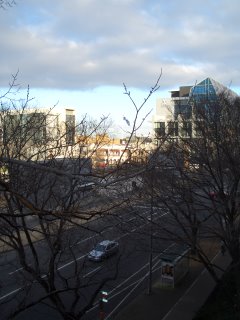 Arriving in Oz
My 'new' office has different views to those in Milton Keynes - a view of the Melbourne skyline to the south and just across the road the new 'Alan Gilbert Building' - a rather recent erection named after the recently departed and controversial VC (and President). More on that later.

Melbourne is perhaps the only city which has not had its elm trees wiped out by Dutch elm disease. I expect them to provide much needed shade in the summer.
Posted by Ray at 1:19 pm No comments:

Despite good intentions my attempt to set up a Blog in 2003 did not amount to much!! Other things took over. For a sample see my webpage.

A change in my personal circumstances from the end of June 2006 has provided an opportunity to take up Blogging seriously. My intention is still to embark on systemic musings as and when issues that concern me - capture my enthusiasm - arise. However I am also starting another inquiry as the posting below explains.

My first posting was written the day after my arrival in Melbourne - 2nd July 2006.

I am Australia bound for an 18 month sabbatical based at the Melbourne Water Research Centre. This will be the first time I have lived in Australia for an extensive period in over 12 years…. so I have set myself the task of keeping a blog about my experiences of re-assimilation! For various reasons I have been apprehensive about the return, or at least my departure from the OU and the Systems Department, at this moment in time.

Two weeks earlier, whilst at a conference dinner at the ‘Our Dynamic Earth’ Centre in Edinburgh, Craig, an Australian participant, was called on to make some announcements. When I said to others at my table that I found him hard to understand – he had a very broad Aussie accent - they looked relieved and exclaimed: ‘What chance have we got? We can’t understand him at all!’ So who and what has changed? This is part of my inquiry.

When I first arrived in the UK I was rarely anxious about travel. In fact I thrived on it! How things have changed. My main anxiety, the ecological footprint of my impending flight, was partially relieved by Mark Y’s gift - two trees planted to offset my CO2 production of 1.9 tonnes for 16911km flight from London to Melbourne. But as the New Internationalist article in the latest edition makes clear, I should not have been so readily relieved. At least it was a gesture and one of the few available in the circumstances ….apart from deciding not to go. Our new course explores the issues.

The trip from Milton Keynes to Heathrow is now something that has to be planned and negotiated – it is no longer just a drive and was never just a train trip. I suggested allowing two hours so as to arrive at 10.20 for a 12.20 departure. Against her better judgement my colleague and generous ‘taxi driver’ agrees. My anxiety goes through the roof as the M1 comes to a dead stop south of Luton; why was our lane, one of three, stopped for longer? A wrong call of the dice? Would this be one of the daily 30 minute to three hour stoppages that are part of driving in the south-east of England – or one of the big snarls that can take the best part of a day to clear? In the end I was fated to catch my plane for Melbourne – the two hours we had allowed to get from Milton Keynes to Heathrow turned out to be just right…but what if….? When it comes to driving in this part of the world being right after the event doesn’t help much - it offers no guidance for next time - a 2004 survey for the Department of Transport found that the main reason why people found congestion annoying was because it made their journey times unpredictable.

Checking in was another queuing event – plenty of time to worry about overweight luggage and what it might cost! I feel sure BA has not worked at its queuing theory. Check-in safely negotiated and on-board but queuing for a take-off slot adds more time than usual – a panel has fallen off an incoming plane! Queuing again for showers in the Qantas lounge at Hong Kong, made worse by a relict of white superiority who, much to his spouse’s discomfort, attempts a queue-jumping coup d’etat. I am not sure if he gains the better of the Thai woman running the show – I left in disgust but did return for a shower just in time, name safely recorded on the queue list! Was he Australian or English – difficult to tell but the worst of the old ‘white man in Asia syndrome’.

On board again and determined to sleep between Hong Kong and Melbourne I am awoken by a very Aussie, nasal ‘Excuse me Darl! (sounding like Daarrl) addressed to me. Later I overhear a conversation between other passengers – a couple – who reject this patronising form of address. ‘Excuse me I’m not your darling’! It is years since I have heard the phrase. Now I am aware of how insensitive it is. Are those Aussies who use it aware of this? Otherwise, hostesses and stewards were affable and helpful.

One of the more memorable conversations from my last visit to Australia was with an attractive, blonde, air hostess who said she lived on the Gold Coast. We were en route from Singapore to Bali at the time. She was enthusiastically telling me about the great shopping there was to be done in Bali. On her previous trip she had taken back 15kg of nice round Bali rocks for her garden! Clive Hamilton with fellow Australia Institute Director Richard Denniss explores the Australian obsession with materialism in their 2006 book called ‘Affluenza: When Too Much is Never Enough’. In her review Amanda McLeod says: “Since the early 1990s Australians have been infected with ‘affluenza’ – a virus over-consumption which Hamilton and Denniss characterise as ‘the bloated, sluggish and unfulfilled feeling that results from efforts to keep up with the Joneses’, a growth fetish and an ‘epidemic of stress, overwork, waste and indebtedness caused by dogged pursuit of the Australian dream’” (see a review)

We arrive early at Tullamarine Airport in Melbourne aided by northerly tail winds. As we come into land I look out the window and feel transported. No other planes are evident – unlike European airports it is not a huge parking lot it seems – but inside there are lots of people all the same – and a long queue for immigration. I might add that our gained time was all lost, and more, due to an on-board wait for a quarantine officer to debrief a sick passenger and give the all clear to disembark. He or she took time to arrive and then had no battery in their mobile phone – which for some reason was needed. SARS, bird flu …..or a common cold – we were not to know. The young lads in the seats beside me breathe a sigh of relief when they can switch on their mobile phones and re-inhabit their ‘new’ world – none of this 12 years ago.

In Melbourne it is raining – something to be celebrated as Victoria has had its lowest June rainfall on record: ‘Melbourne, Australia is in jeopardy of running dry in the next 15 years if does not cut water use by a third’. Water is now A on most people’s list including government . Perhaps our work with water as part of the SLIM project will have something to contribute?
Posted by Ray at 8:01 pm No comments: