Having a coffee in the lounge at Armidale airport – just off the New England Highway I was confronted with the following:

‘Caution
It is an offence to make jokes about bombs or weapons or leave luggage unattended. Penalties exceed $5,000
Aviation Transport Security Regulation 2005’

Overnight on ABC radio national I heard a programme exploring some of the systemic implications of current Australian legislation, drawing attention to the propensity of parliamentarians to legislate in the face of crisis, as if this were the only form of action open to them. Government is also intervening in what research can be conducted on the subject. This University of NSW site offers more perspectives.

Later from my hotel window at Cronulla Beach in southern Sydney I am invited to consider Gary’s Original Greek Yum Cha, all I can eat for only $30! A good example of cultural fusion? Also a metaphor for the current passion of urban life in Oz– eating and drinking! Obesity is a major problem in Australia. A quick walk around the local shopping centre here at Cronulla reveals every other shop as some form of food or drink outlet.
Posted by Ray at 9:51 am No comments:

Email ThisBlogThis!Share to TwitterShare to FacebookShare to Pinterest
NSW is likely to burn up this summer

Yesterday, Sunday 24th September was one of those horrendous Oz days when the fragility of European settlement is revealed. Winds from the north-west, gusting at 90km per hour or more, a dry landscape and temperatures into the 30s – some of the highest September temperatures on record. Several houses were destroyed by fires, one man, a motor-biker, was killed when the branch of a gum tree fell on him as he travelled through the Kangaroo Valley (a very Australian form of death!).

In my travels on this trip – now over 3,500km – I can see that most of NSW is still in drought, some of it ‘green drought’. Unless there are significant falls of rains in the next month or so much of the grain harvest will fail or be depleted, stock will also fare poorly over a summer with little pasture growth. Worst of all, if there are more days like yesterday, much of NSW will burn. More houses will be lost and possibly lives.
Posted by Ray at 9:45 am No comments: 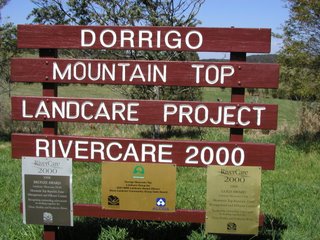 One change that has occurred, for the better, is that of (water) catchment consciousness. On road-sides and even on signs in urban roundabouts (e.g. Wagga Wagga) attention is drawn to the local catchment. It is now possible for all citizens to know their catchment address. I look forward to finding out if the extent of catchment consciousness extends beyond the placing of signs, made possible through government grants. I hope so.
Posted by Ray at 9:41 am No comments: