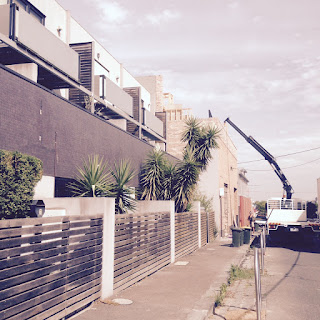 The headline today: "Melbourne records its hottest March night since records began". Temperatures hovered around 29-30C for most of the night; we had a bedroom fan running all night.  It would be interesting to see what the power load was over night and what the longer term implications are for energy provision and the management of heat stress which is exacerbated when there are consistently high minimum temperatures i.e., the absence of relief from heat stress.

"Professor Will Steffan, from the Climate Council, said the heatwaves seen in south-eastern Australia “have the fingerprints of climate change all over them”.

“Without serious action on climate change, Sydney, Melbourne, Adelaide and Canberra could all experience a doubling or tripling of days over 35C by 2070,” Steffan said.

“But Australia’s emissions continue to go up in the absence of a credible plan to meet Australia’s commitments in Paris."

We live in North Melbourne, part of Melbourne City Council which is engaged in a major tree planing program to try and ameliorate the heat island effect.  Our street is particularly affected by high temperatures and after some lobbying we have a commitment from the Council to plant trees in April - see tree guards already in place in the picture.

It is to be hoped the trees will eventually make a difference; unfortunately most of the buildings in this street were built without serious attention to standards for thermal insulation, including double glazing.  Past poor practice is bad enough but the new building - a series of units, going up at the end of our street - has some of the flimsiest construction I have ever seen.  It is just not acceptable when building standards are not in place to meet climate change impact.

Meanwhile recent analysis has shown that:

"Climate zones head south. Analysis by the Australian Grains Export Innovation Centre shows that Australia’s climate zones have moved significantly in the past 15 years. Mediterranean climate and winter dominant rainfall is contracting in a south-westerly direction, while summer dominant and neutral rainfall zones have expanded south."

Elsewhere it has been reported that:

"Eastern Australian ecosystems are among the world’s mostly highly sensitive to climate change according to a new study published in Nature. Researchers estimated how plant growth across the world has varied with fluctuations in temperature, water availability and cloud cover and which of the three climate variables is most important for each ecosystem. Understanding vegetation responses to current climate variability will help improve predictions of future consequences of such variability on our planet’s ecosystems and biodiversity, and our security and welfare."

When will our governance systems change to become fit for purpose for the world we are already experiencing?

I have railed against the misuse and abuse of modelling, particularly economic modelling in many fora, including on this blog (e.g. August 8, 2008).  Now Ross Gittins, whose views readers of this Blog will know I respect, has written claiming "Time to take a stand against misleading modelling"


In Gittin's posting there is a clip from the Australia Institute calling for a new code of conduct to be introduced for modelling, particularly modelling used to influence policy choices. Peter Martin, Economics Editor of The Age also alerted readers to how recent modelling was being used deliberately to confuse for political ends.

Gittins says "I can't remember when so many economists of repute have gone out of their way to attack a modeller's findings, and done it so bluntly." If this is the case then it is good news that economists themselves are aware of the systemic failings of modelling practice within their own ranks.  But do they go far enough?  I am afraid the answer is a resounding no! As Gittins articulates:

"...modellers concede that "general equilibrium models are necessarily a simplification of the economy and, as such, they can only incorporate a stylised representation of the tax system".

I'd say models are a cartoon caricature of the economy, quite incapable of answering the intricate questions we ask of them."


On another front Tom Clark outlines how we all collude to 'model' our understandings through the use and conservation of language.  In his call for a new language to talk about the economy  he says:

"Trade became respectable, and lending money for profit, which had been sinful usury, became a fruitful outlet for thrift. Credit became interwoven with honour and pride, while debt was shot through with weighty moral obligations.

These are the orthodox financial prejudices that have, with brief exceptions, held sway ever since – in Gladstone’s red box as much as Thatcher’s handbag. When the 2008 economic storm hit (a metaphor which itself does ideological work, implying an act of nature rather than a crisis of human folly) the then shadow chancellor Osborne reached for a tried and tested script. “The cupboard is bare,” he sternly announced, likening bankrupt Britain to an over-indebted home.

Economists have objected to lazy comparisons between domestic and national finances for the best part of a century: governments can tax, grow or even print their way out of debt, three important escape routes not open to individuals. In the 30 years after the second world war there were deficits in all but six. But far from this leaving Britain’s cupboard bare, the national debt dwindled from 250% to 50% of GDP.

So the household metaphor is deeply misleading but it remains irresistible to politicians and powerful with the public. It offers a way to make sense of the otherwise baffling billions in national debt through analogy with everyday experience. Furthermore, explains Jonathan Charteris-Black, an expert on rhetoric at the University of the West of England, it embeds “one of the most widely used of all political images: the nation as family, with the government as responsible parent”."

Whilst modelling remains the main form of praxis of economists and the purveying of conceptually dead metaphors a major aspect of political and journalistic praxis it seems to me there is little scope to break out of the traps we set for ourselves by what we do when we do what we do!
Posted by Ray at 8:34 am No comments: