I have made earlier postings about John Seddon's work   He is scheduled to be in Sydney and then Melbourne at the end of the month.  I recommend attendance if you can make it.   This column by Simon Caulkin is worth looking at in its own right as well as for getting a feel for the sort of change that Seddon and his colleagues facilitate.

Lessons from the front line: What works and what doesn’t in UK public sector reform | Professor John Seddon

Cost: $22 (NSW IPAA members) or $44 (non-members), includes canapés and drinks following the presentation.
RSVP here. Limited places so register now This event is being organised by CPD and IPPA, registrations are being coordinated by IPPA

Join the Centre for Policy Development & the Institute of Public Administration Australia (NSW) for a seminar with Professor John Seddon, providing insights into the UK government’s radical reforms of the public sector – with some lessons for Australia. Read John’s thoughts on Big Society here.


Through the Blair years John Seddon gained a reputation as a leading critic of public sector reform. His 2008 book, Systems Thinking in the Public Sector: the failure of the reform regime… and a manifesto for a better way, was read by Cameron’s policy team while in opposition and was thought to be ‘going too far’; but in some ways Cameron’s new coalition government has gone further. The target-setting regime is over and the Audit Commission is to close. On other fronts, Seddon remains a strident and informed voice against UK government policy, arguing that ministers seek policy-based evidence rather than evidence-based policy.

Seddon is as vociferous about what works. Those who follow his ideas achieve performance improvements that represent economic benchmarks. In this unique seminar John Seddon will talk about what works, what doesn’t work and he will offer up some clear advice for Australia:
The seminar is being presented as part of CPD’s Public Service Research Program. To  download “The State of the Australian Public Service: An alternative report”, visit the program webpage. Be sure to sign up to our email list here [link] to get the latest updates.

John has received numerous academic awards for his contribution to management thinking. Originally an occupational psychologist, John was persuaded by Deming’s obvious truth, that we, mankind, invented management and we can change it. John has developed methods to help managers of service organisations change from a conventional command-and-control design to a systems design.
Posted by Ray at 1:56 pm No comments:

The State of the Australian Public Service: An Alternative Report 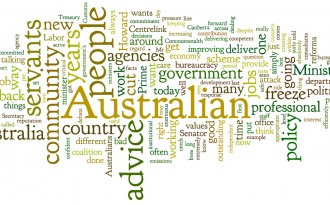 Today the Centre for Policy Development released The State of the Australian Public Service: An Alternative Report, as part of its Public Service program.

The report’s key findings include:
Shadow Treasurer Joe Hockey has declared the Coalition’s plans to slash public spending and axe at least 12,000 public servants’ jobs if they gain government at the next election in a rush to bring the budget to surplus. In recent days it has been revealed the Coalition plans to cut public spending by $70 billion, shutting down entire government departments.

The Australian Public Service (APS) employs approximately 160,000 people across 133 agencies, making it one of our largest employers and most significant investments. The staffing of the APS generates heated debate in the media as well as in Parliament. Views are polarised. But what do we really know about the APS? And does much of the rhetoric match up to the reality?

The State of the Australian Public Service analyses 20 years of opinion research on  the public service. The report finds evidence of a disconnect between frequent public service ‘bashing’ by politicians and commentators and generally positive views of the public sector in the general community.

Most Australians are willing to forego income to pay for public services. There’s a strong preference for services to be provided by the public sector: twice as many people support public over private provision of health and education for example.
Our research into long term staffing trends also contradicts the portrayal by some politicians and media commentators of a public sector that is ‘bloated’.

“To return the ratio of APS staff to Australian citizens to 1991 levels would require increasing APS staffing to approximately 214,000, an increase of approximately 50,000 staff.”

Unless the community expects less of the public service or the APS is able to deliver its services with significantly fewer employees, the argument that we have a ‘bloated’ public service is baseless.
The report also finds that the APS is an increasingly top-heavy workforce that does not reflect the diversity of the Australian community, with Indigenous Australians and people with a disability under-represented, and women under-represented in the senior ranks.

Dr James Whelan, the report’s author and Director of CPD’s Public Service Program said, “British Prime Minister David Cameron’s ‘Big Society’ vision entails cutting the public sector budget by ₤80 billion, freezing wages and calling for tenders for most services. At a time when the public service is under attack in the UK, Canada, New Zealand and the US, Australian politicians who are tempted to follow suit should be aware of Australian voters’ strong support for the public sector.”

CPD’s  The State of the Australian Public Service offers an accessible handbook of all you need to know about attitudes toward the public service and staffing trends.
Posted by Ray at 12:22 pm No comments:

I recommend the articles on this site as an antidote to the climate skepticism being fostered by News International (see today's Herald Sun) and Australia's howler-in chief.

In particular take a look at the article by David Roberts called:"Stuff white people like: denying climate change". Here is an extract:

"There's a study running soon in the journal Global Environmental Change called "Cool dudes: The denial of climate change among conservative white males in the United States." It analyzes poll and survey data from the last 10 years and finds that ... are you sitting down? ... conservative white men are far more likely to deny the threat of climate change than other people.

OK, that's no surprise to anyone who's been awake over the last decade. But the paper goes beyond that to put forward some theories about why conservative white men (CWM) are so loathe to accept climate change. The explanation is some mix of the following, all of which overlap in various ways:

I also recommend his follow up article: "How do you solve a problem like conservative white men?"  There are some good arguments here  which resonate with my own view that we have gotten ourselves into the wrong conversation.  It is not that climate change is not important it is just that it is the wrong framing of the issue.  We needs conversations of hope and transformation as well as ones that embrace the complexity of our situation - the intersections of loss of biodiversity, resource, particularly oil depletion, income inequality, urban congestion and city dysfunction and post carbon societies.

Email ThisBlogThis!Share to TwitterShare to FacebookShare to Pinterest
To Mr. and Mrs David Cameron from Nathaniel Tapley

Much has been written on the riots in Britain and no doubt there will be many theses produced in the coming few years.  Having spent May to July in Europe, much of it in England, I must admit to not being surprised that the riots have occurred, deplorable though all such acts are.   In the many pages of analysis look for those that address the systemic factors that  have given rise to the riots but perhaps more importantly look to the future and ask: starting from here how is the situation to be dealt with systemically?

For me one key issue to look at is the English schooling system and the very low percentage of students who go on to A levels.  In some ways aspects of  the schooling system are designed to  produce alienation - and this has nothing to do with teachers and the many well intentioned people who contribute to schooling.  It is a long-standing structural problem in my view - yet to be fully overcome despite recent innovations.

But this is only one aspect of a complex situation.  Natt Tapley points to another important facet - that is the role models that leaders provide, and in this respect his letter is a beauty. Nothing alienates more than those who cannot walk the talk - it is bad enough when those who do not know that that is what they do prognosticate but even worse when this behaviour is pursued knowingly.
Posted by Ray at 10:23 am No comments:

REDD-plus at the crossroads in Papua New Guinea

Some of the politics and institutional complexity around REDD schemes are well analysed in this article by Colin Filer of ANU. The potential for systemic failure seems significant. As in so many other contexts Colin's conclusion that: "Programme and donors grow increasingly despondent about the prospects for effective institutional reform" highlights the domain in which so much systemic failure rests.
Posted by Ray at 9:50 am No comments: