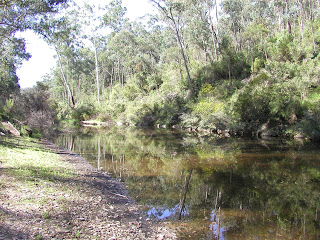 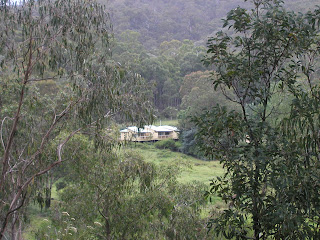 Until this week I had never been to Gippsland, the eastern portion of Victoria that combines coast and parts of the Great Dividing Range and much of the native forest for which Victoria is famous (or infamous in some circles!). We found a great place - the Waterholes Guest House - nestled on the Nicholson River with no near neighbours and pristine river upstream (i.e. no human activity).

We saw many birds, including bower birds, king parrots, a lyre bird and many more, eastern grey kangaroos, black wallabies, a black snake, a large goanna and had the pleasure of a whole stream to ourselves at the height of the tourist season. Floating down the river was evocative of our childhoods spent in rural Australia. 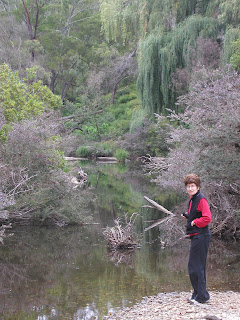 Email ThisBlogThis!Share to TwitterShare to FacebookShare to Pinterest
Know what we are doing to our world!

Sometimes the idea of mandatory home pages for all net users begins to make sense. Such is the case for the Worldwatch Institute and its publications. As Melbourne swelters in 40 degree plus temperatures and the State Government makes unprecedented requests for citizens to curb their energy use (which is still primarily based on 'dirty' brown coal), the cumulative effects of our actions becomes apparent to all. Engaging with reports such as "Share the Worlds Resources" makes it abundantly clear that need for action is still way behind political will. It is time for citizens to demand braver, more responsible long term decisions from governments. This extract highlights some of the most disturbing trends:

"With a global population of 6.6 billion and growing, the ecosystem services upon which life depends are being stretched to the limit due to record levels of consumption:However it is hard for me to see that the actions announced yesterday by the British Government to commit to nuclear power expansion are brave or responsible. On the BBC last night I was impressed with the arguments being put forward by Zac Goldsmith - his arguments on this matter struck me as systemically desirable and ethically defensible!

Anyone here in Oz who listens overnight to the BBC and Deutsche Welle radio (see links to the right) transmitted on ABC News radio, cannot help but be struck by the different worldviews and balance of content that are presented. The German perspective is far closer to my own.

The latest Worldwatch State of the World report takes a new approach which combines what is good that is happening with the traditional analysis of what is wrong. A combination of new rules (institutional arrangements) combined with conservation and market mechanisms seems to be at the core of their recommendations for innovation.
Posted by Ray at 5:34 am No comments:

Where to for Australia? The Wellbeing Manifesto

A site worth engaging with, though the details need updating as Clive has now resigned as Director of the Australia Institute to be replaced by his deputy, Richard Denniss.

'Many Australians feel that the political system has let them down, and that governments are not responding to their real concerns. We seem to have lost sight of a vision for a better society and to have entrusted our future to wherever the market takes us.

This website presents a new manifesto, one that takes as its starting point the belief that governments in Australia should be devoted to improving our individual and social wellbeing.

We now know a great deal about the factors that enhance our wellbeing and those that diminish it. Increasingly the negatives seem to outweigh the positives, despite our affluence.'
Posted by Ray at 5:33 pm No comments:

Email ThisBlogThis!Share to TwitterShare to FacebookShare to Pinterest
IT project failures in the UK - the tip of an iceberg?

A Guardian investigation that does not include the NHS National Programme for IT!!

"The cost to the taxpayer of abandoned Whitehall computer projects since 2000 has reached almost £2bn - not including the bill for an online crime reporting site that was cancelled this week, a survey by the Guardian reveals. The failure of the multimillion pound police site marks the latest chapter in the government's litany of botched IT projects, with several costly schemes
biting the dust. Major blunders overseen by Downing Street have included the Child Support Agency's much-derided £486m computer upgrade - which collapsed and forced a £1bn claims
write-off - and an adult learning programme that was subjected to extensive fraud. Top of the ministries for wasting public money is the Department for Work and Pensions, which squandered more than £1.6bn by abandoning three major schemes - a new benefit card which was based on outdated technology; the upgrade to the CSA's computer which could not handle 1.2m existing claims; and £140m on a streamlined benefit payment system that never worked properly. The Guardian's survey of abandoned projects is not exhaustive and the total of £1,865bn is likely to be a considerable underestimate of the actual cost to taxpayers because neither Whitehall nor the National Audit Office, parliament's financial watchdog, keep definitive lists of which schemes go wrong. Neither does it include the major modifications required to fix new systems that have failed to perform as required. One example is the pilot work done on the new £12bn NHS computer system - where outdated technology was installed at Bexley Hospital in south London, and has had to be replaced after it was found to be "unfit for purpose". Another is the huge modification required to the new computerised single payments system for farmers run by Defra's Rural Payments Agency, where the government has had to set aside some £300m to meet possible EU fines for wrong payments to thousands of farmers. . ."
Posted by Ray at 8:06 am No comments: