Working in South Africa just after the first all-party elections in June-July 1994 was for me a profound experience; many of the thoughts I now have about our current Systemic Governance Research Program have their origins in events from that time.  I was a member of an ODA (a precursor to DfID) funded "co-learning" consultancy to LAPC (Land and Agricultural Policy Centre) in South Africa to work with the Ministries of Land Reform and Rural Development, Agriculture and the RDP Secretariat and NGO's to examine issues and opportunities for people-centred rural development (including future directions for agricultural extension). It was set up as a co-learning consultancy (probably the first ever funded by ODA) because, we argued, the context was so fluid that (i) external prescriptions would not be relevant; (ii) any learning would have to be applied in real-time and (iii) what was learnt had to stay in-country not go home with the consultants.

The consultancy comprised over 20 people all-told made up of externals and internals to SA, roughly in equal balance (see a short reflection published in 1996 below).  A process/inquiry design was developed collaboratively and enacted over several weeks.  The outcomes of our learning activities were used to design an experiential workshop for key policy stakeholders towards the end (held at at Ithala Game Reserve).  A report was produced:

I have now been back to South Africa five times since 1994 so have been able to maintain a watching brief on the trajectory and travails of  South Africa's governance experiment underpinned, as it is, by espoused commitments to transformation (a key systems notion). As I write I am conscious that in 2012 the first cadre of SA citizens born post-apartheid were eligible to vote - these same citizens have only ever experienced an ANC-led government.  This is a point made several times by Martin Plaut and Paul Holden in their 2012 book 'Who Rules South Africa?'

'Who Rules South Africa' which I have just finished reading is an excellent, timely book as many reviews testify.  It provides a systemic analysis of a very complex situation - but what reception and impact has it had internally?  As one internal review observes:

'Who Rules was published before the Marikana massacre, but the judgments in the book should stand the test of time. The fallout from the events of 2012 – the massacre, the strikes, Julius Malema’s attempts at mass mobilisation, infighting in the lead-up to ANC electoral conference in Mangaung in December will demand an update in time.'

It was also published before the deal about future leadership sealed in December 2012 between current president Jacob Zuma and former COSATU heavywight turned businessman, Cyril Ramaphosa. Justice Malala writing in the Guardian observes that:

"Just the day before Zuma's party victory a survey found that his national approval level is 52%, while the defeated Motlanthe's is at 70%. Speculation is that Cyril Ramaphosa, the ANC's newly elected deputy leader, will slowly be pushed to become the face of the party and that his position as deputy president will take on elements of a prime minister, thus relegating Zuma to a ceremonial leadership role similar to the one played by Nelson Mandela in the 1990s.

But this is unlikely to happen. Zuma's victory can be ascribed largely to the fact that he is a man who is trying to do everything in his power to ensure that charges of corruption – controversially dropped against him under dodgy circumstances just weeks before he became president in 2009 – are not reinstated against him. For this to happen he has to keep his hand on the steering wheel, and is unlikely to cede power to a deputy."

In other words many of the systemic forces at play outlined in 'Who Rules' are likely to continue into the forseeable future.  This will be a real test for the South African people and the institutions they put into place after 1994. Given my own experiences I found the chapter called 'Sharing the Beloved Country: Land Reform Since 1994' in 'Who Rules' of particular interest.

In this chapter Martin Plaut describes the saga of land reform since 1994, although many would argue it is a saga of 'no land reform'.  I cannot reprise all the arguments here but it interests me that issues we uncovered in 1994 persist.  One issue in particular has been particularly persistent - that of framing the transformation pathway as one from poor, black farmers or landless blacks to commercial black farmers in the image of contemporary white farmers. We tried to dispel this inadequate framing in 1994 but clearly without success. Our arguments were that different images of farming and how land contributed to rural livelihoods was needed.  Plaut, quoting Ben Cousins (who was part of our consultancy) describes a form of multi-functional livelhood system emerging in KwaZulu-Natal.  The extent to which agriculture and food production are part of the mix seems uncertain however. On a personal level I have no doubt that over time more blacks should have access to land for food production but at the moment policy makers seem to be pursuing simplistic rather than systemic strategies. This is bascially a social, political and ideological issue that is not amenable to simple reponses or responses from those who do not understand 'rural realities'.

Plaut (p.330) cites Edward Lahiff, a proponent of the view that landholdings are too large and that 'they should be broken up to allow the emergence (or re-emergence) of a peasant sector.'  Clearly this could be part of a mixed policy response that as it progresses does not undermine food security and diminish, unduly, foreign earnings from agricultural exports.Unfortunately willingeness to respond to the complexity in a systemic manner seems to be largely missing. 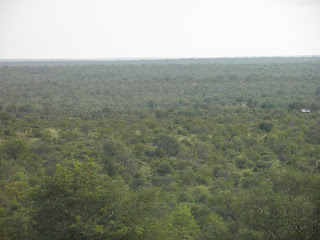 "In 1994 a group of five expatriates and eight South Africans (SA) formed one of the first process consultancies to be funded by ODA.  Held over one month, it commenced just after the multi-party elections, at a time of considerable flux.  This made predetermined terms of reference (TOR) irrelevant and created the opportunity for the team in conjunction with relevant key stakeholders in SA to formulate TORs which were relevant to the new, dynamic, context. These were: "To contribute to the emergence of institutional forms which assist in the process of demand-driven, people-centred rural development and land reform {which} will explore the nature and quality of relationships between local, provincial and national structures currently emerging and which are likely to effect rural development processes which support rural people."

The team then proceeded to operate within a systemic action research framework (Checkland 1991; Ison 1993) to follow cycles of investigation (interviews, visits, participant observation, analysis of primary and secondary data) and synthesis through the design of participatory workshops in which relevant stakeholders were able to learn their way to new appreciations or gain new insights (Cousins 1994).  These workshops provided both challenge (to preconceived notions which seemed no longer relevant) and support (for enthusiasts who we recognised as the primary agents of change - see Russell and Ison 2000).

One of the outcomes of the process consultancy in SA in 1994 was the recognition of the need to build capacity to build capacity for sustainable natural resources management. Subsequently a position description appeared in the local press in connection with furthering the work we had initiated .   The person skills sought included: (i) process skills and systems perspective on institutional development and capacity building; (ii) training, adult learning and group facilitation skills; (iii) experience with participatory learning approaches in field and workshop settings (e.g. PRA); (iv) experience with working in large bureaucratic public agencies and facilitating institutional change; (v) personal authority and presence; (vi) negotiation and conflict management skills; (vi) willingness to travel extensively, particularly to remote rural areas.

This is a challenging job description and all too clearly such people are in short supply, but, I would argue, increasingly needed. For this reason the Open University is collaborating with IIED and other partners to bring the economies and recognised success of supported open learning to the global need to build capacity for sustainable natural resource management. Our approach will be systemic and clearly recognise the need for institutional change, when relevant, to be inside our system of concern."

Looking back on these reflections it is clear that people with these skills are still in short supply, but much needed and not only in South Africa.  I like to think that our OU STiP MSc is helping to fill the void.

Inequality for all - follow-up

Further to my post on the documentary 'Inequality for All' I commend this site to you as riveting viewing.  Given this analysis I am left even more convinced that what we are experiencing across the globe is the nadir of our western-governance systems. There is an urgent need for governance reform - institutions and processes that are attuned to 21st century realities.  Last year I commissioned a cartoon from Simon Kneebone to capture how I was thinking about this issue. 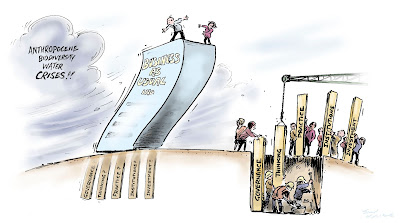 My argument is that as we enter the Anthropocene with its associated water, biodiversity, inequality etc crises then we cannot build responses on the old foundations - a business as usual approach is not feasible - to do so would, in Russ Ackoff's terms, involve doing the wrong thing righter, rather than doing the right thing. In principle (if not always in practice) acceptance that we are in the Anthropocene brings with it the need to reconsider all human invented institutions (norms, codes, rules, policies etc). In my cartoon I suggest we have to rebuild the foundations of what we do by focusing on governance, thinking, practice, institutions and investment (i.e. how and where are financial resources are allocated).

See Helen Wilding's blog for an elaboration of some of these ideas. I am grateful to Dave Griggs for drawing my attention to the inequality mashup.

In search of a systemic response to curbing media excess

It is a pity that the Australian response to this important social issue has been botched.  The response in Westminster seems more reasoned and workable - at least it was socialised through the parliamentary process unlike Australia.  Trevor Grant's excellent article explores the Australian issues.
Posted by Ray at 6:27 am No comments: