Can the new Rudd government genuinely learn from the Blair years - or will it duplicate the same mistakes?

It is surprising how easily governments and their agencies destroy relational capital. In our research we have come to understand relational capital as the glue the holds all the other forms of capital together. So, for example, as Simon Caulkin points out, the UK Treasury has 'singled out five 'levers' of productivity - competition, innovation, enterprise, investment and skills - and subjected each to major programmes of reform'. No doubt their prime focus is on economic and just perhaps, social capital. Despite the Stern report, natural capital still takes a back seat! For the treasury 'best practice' is the glue but it does not work!

The concepts of 'productivity, and 'best practice' are both problematic. As Caulkin outlines, 'productivity...is not primarily about inputs but the messy, complex, human process of turning them into usable outputs - i.e, management [I would say managing...as an active process], not economics'. Hence the need for capability in systemic praxis - practice which builds, sustains and facilitates relational capital through social learning.

Caulkin bases his article on Advanced Institute of Management Research (AIM) 'which suggests that [UK] ministers' views of management are naive. Broadly, the government thinks that improving company performance is about supply-side economics and best practice'. Best practice is a misnomer because practice that is best can only ever be contextual - so it has to be reinvented all of the time as contexts change. Which is not to say that we cannot learn from what others do - but then it becomes best praxis - taking the thinking and applying it to your own context!
Posted by Ray at 3:41 pm No comments:

On Sunday November 25 2007, Simon Caulkin in the Observer wrote:

'The real British disease is the unerring talent for putting together entities that are less than the sum of their parts. The comical inability to think in systems terms - call it management dyslexia - was on dazzling display last week, all over the front and back pages.' Read on!

Email ThisBlogThis!Share to TwitterShare to FacebookShare to Pinterest
Public - private partnerships. Are they systemically desirable?

My experience of PPP's in the Blair years in Britain make me highly suspicious of PPPs. George Monbiot captures many of my concerns. What I am keen to understand is whether they are systemically desirable, or not, and what purpose could legitimately be assigned to them from the perspective of good governance? It is not easy to discern the answers to these questions. My understanding from the British situation was that they were a convenient means to do business with the private sector as well as being a device to keep debt out of the calculations that determine credit ratings for a country or state (i.e., Moodys!).

I am thus interested to see that there is significant dissent with the Victorian Labor Party following a push by the new premier to use PPPs to build new schools as well as the new desalination plant and associated pipeline. It is easy to see this policy shift as 'copy cat' tactics but are those responsible for pushing them the same people as pushed them when Blair was in power? What learning has occurred with whom about their effectiveness in Britain? I hope the growing dissent in Victoria will allow these questions to be explored and thus bring greater transparency to the role of PPPs.
Posted by Ray at 2:40 pm No comments:

Email ThisBlogThis!Share to TwitterShare to FacebookShare to Pinterest
Victoria's green report card in the red

In Victoria it is obvious to even the casual observer that the 'environment' has taken backstage to economic development in the recent switch of Premiers and the subsequent Ministerial and Ministry reshuffle. This is apparent in the new ministerial arrangements for water. Tim Holding, one of the new Brumby 'kitchen cabinet', is now responsible rather than the Environment Minister as was the case before. Insiders point to how decisions are now made - as with the scrapping of environmental flows on the Yarra, which some sources suggest was a decision handed to Gavin Jennings.

An Envirowatch report released yesterday outlines where the government is keeping its environmental promises (10%), on target to keeping them (40%), at risk (46%) and broken (4%). What is missing from the report is the recent decision taken by Premier Brumby to reverse ALP policy and release GMO canola. I anticipate on-going agitation to change this decision.
Posted by Ray at 2:15 pm No comments:

All explanations arise in social relations - as Sir Geoffrey Vickers argued they give rise to our standards of fact and value and our ‘relationship maintaining or breaking’. Moreover all explanations arise this way but some are conserved over longer time frames than others. Explanations also ‘enter our bloodstream’ as we live our lives – throughout our biological and social development. Maynard Keynes’ oft quoted remark that in his experience those who claimed to be practical men (sic) were usually victims of some theory 30 years out of date is a variation on this point.

Klaus Krippendorff also points out how oppressive certain theories, or more precisely 'theorizing', can be. In this light Martin Fell has written an insightful article pointing out how the conservation of certain economic theories, in this case the theory of comparative advantage explicated by David Ricardo in 1817, is part of 'the terminal disease suffered by economists'! See this image. 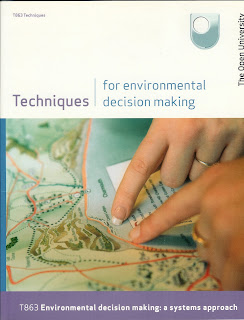 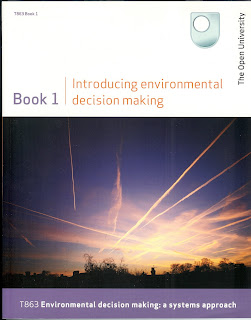 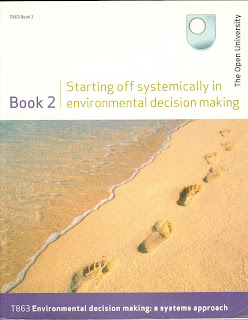 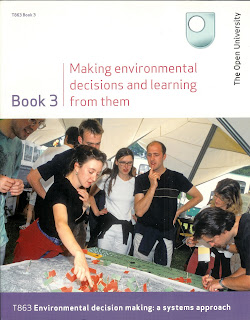 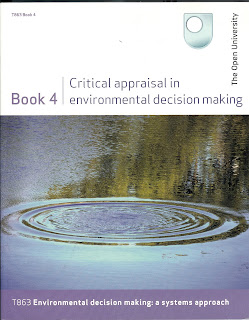 The current meeting in Bali to plan beyond the Kyoto agreement, the new directions for Australian policy following election of the Rudd Labor Government and the needs in the UK to ensure that Government commitments to 'sustainability' are honoured, all draw attention to the need for new forms of praxis for climate change adaptation and mitigation. Praxis is theory informed action and is as relevant, or more relevant, than many of the claims for evidence-based practice. At the Open University our course on 'Environmental Decision making: a systems approach' has a focus on praxis which is proving popular. This is one of the core courses in the Masters in Environmental Decision Making.

Policy needs praxis, or perhaps more importantly a praxiology - an understanding of effective action. Effecting action on the back of good policy is where systems-based practice approaches can help. In a climate-change world systemic environmental decision making praxis is needed to engage with and 'improve' complex situations characterised by uncertainty, connectedness and, often, conflict and multiple perspectives. In the world as we now understand it any approach to dealing with wicked problems, or managing 'messes' or effecting 'joined up' or 'whole of government' actions necessarily has to take the environment into account.

As the images show the course has four set books (one for each block of the course) supported by a Techniques book as well as Readings for each block. The course is presented over 23 weeks twice a year. In the coming presentation 123 students are registered. Some of the course materials, which also includes a DVD can be purchased directly from the Open University.
Posted by Ray at 4:11 pm No comments: