My dear friend and colleague Phil Wallis died on the 2nd of February after an 18 month struggle with bowel cancer.  His funeral was held at the Springvale Botanical Cemetery on Thursday 8th February.  This eulogy delivered at Phil's invitation was one of two tributes paid during the service.   The final reading was delivered by Phil's mother - 'A wish for you my child'.

I feel immensely privileged to have been invited by Phil to deliver this eulogy.  Unlike other eulogies I delivered for my parents whom I also loved this is my first experience of having discussed possible content in advance. The conversation with Phil was for me a heart-wrenching experience. But true to form Phil was strong in the circumstances – considerate and concerned for me through my tears.   My aim today is to leave you with a stronger sense of Phil the professional.  Much of the detail of his professional life is in the document available when you entered.  I invite you to read this when you can and as you do to marvel at how much Phil achieved in the 10 years of his post-PhD professional life.  It is indeed impressive and stands as a legacy worthy of celebration.  At the end Phil felt comfortable within himself with what he had achieved, though it would be better to reframe his contributions in terms of what he contributed to us, his colleagues and friends, and society more generally.
Phil began his academic life at the interface of geography and chemistry.  He graduated with first-class honours and won a prestigious scholarship to continue at Monash for his PhD in the emerging field of green chemistry.  But he had interdisciplinary and then transdisciplinary tendencies.  His interdisciplinary interests began within UNIWATER, a Monash- Melbourne Uni collaboration, and later in the Systemic Governance Research Program at Monash.  It was in these two programs that our collaboration began.
Phil was open to the complexity and uncertainty of the world around him and felt that research that acted at the interface of the social and natural sciences was important for long term sustainability.  This led him to do pioneering research with people – collaborative research, systemic co-inquiry or co-design. He became known for his expertise in process design in research and stakeholder engagement and for his excellent facilitator skills.  This was a brave turn to make in a world where disciplinary focus is more readily rewarded.  Writing last year Phil justifiably claimed ‘expertise in many facets of sustainability research with a proven track record in communicating results by seminar and publication’.
Phil’s academic work has been cited by about 400 people, mostly since 2013. In other words his research has had a significant international and national impact which will continue for some time to come.  In one of his most recent papers a self-description is that of ‘an applied, transdisciplinary researcher and natural resource management practitioner’.
When Phil and I talked about this eulogy and our decade-long collaboration two particular experiences came to the fore in our reflections.  For Phil it was a visit we made together to Canberra in November 2014. We first attended a Peter Cullen Trust seminar and dinner. We listened to John Hewson deliver an enlightening after-dinner talk.  John argued that investors were ignoring the growing risk of fossil fuel investments, and [that] portfolios [were] highly skewed towards oil, coal and petrol stocks rather than being balanced with commodities carrying less long-term risk.’ We both admired Hewson for his commitment to the divestment movement. The following day we had meetings at the National Water Commission and the Murray Darling Basin Authority or MDBA as we called it.  At the latter we mounted arguments to allow our earlier research conducted within the MDBA to be published. Despite our arguments they denied permission and continue to do so.  Our research spoke truth to power; if taken on-board the results may well have avoided the current series of systemic failings in governance of the Murray Darling Basin.

Why was this experience significant to Phil? Well he was very proud to have been made a fellow of the Peter Cullen Trust. The regard with which he is held within this network is testimony not only to his quiet leadership skills, his behind the scenes facilitation, but also for his integrity and the understanding he has gained, and helped to develop, of the complex policy and practice issues that confront water, river, climate change, biodiversity, food security and natural resource governance in Australia and beyond.  It was also a visit in which we were in the thick of it doing our best to make research relevant to policy and practice.
For my own part the memory that surfaced was of hiking with Phil and John Colvin in the Turgela Gorge in the beautiful Drakensburgs in Sth Africa. Both Phil and I wrote blog-posts about the experience. Phil wrote:
“Just recently a book chapter project came to fruition……The book had its genesis in the 2012 International Conference on Fresh Water Governance for Sustainable Development, held in Drakensberg, South Africa. This conference was memorable for me as I had the opportunity to collaborate with Derick du Toit, Sharon Pollard, Harry Biggs, John Colvin, and Ray Ison in preparing an interactive special session on systemic governance.  The conference was also a good chance to see the amazing landscapes of the Drakensberg region, including a hike up Tugela Gorge.’
What Phil did not write, perhaps in deference to concerns Beth or his mother may have held, was encounteringmassive lightning storms – the night following our walk in the midst of a storm the hotel management would not let us walk the 100 metres or so back from dinner to our bungalow. Why we asked? The answer: because one of their clients had been killed by lightening some months before.
As Phil would have done when charged with undertaking a project – even a eulogy – I have sought to give voice to others, to value multiple partial perspectives as to how Phil was experienced in his professional life.  The Phil that emerges from this albeit limited selection is:
(i)                Phil the mapper out of ideas, the planner, synthesiser, systems diagram user, who could sit quietly in meetings and at a critical stage offer his model, diagram or synthesis that ‘wowed’ those present! “Starting out not really knowing where we were going to go, Phil would be there with whiteboard pens in hand, and pretty soon the discussions would take off, ideas would flow and bounce around, the inspiration would come, and the maps would grow and spread out. “
(ii)              Phil the calm and unassuming leader - always able to bring people along with him. One example was when he worked with a group of fellow early-career researchers to write a collaborative paper about their experiences. It was Phil's ability to connect with people in both an intellectual and personal way and lead a group that really made it come together. All of his co-authors from this experience have been in touch with me and offered similar reflections.  One said: ‘he had a big effect on my career … because he elevated my confidence and made me feel empowered at a time when I was doubting myself a lot.’
(iii)            Phil the great collaborator: supportive, patient, highly organised technologically adept and generous. No matter what was happening he seemed to be able to take it in his stride.
(iv)            Phil the 'doer' - he put in the effort to turn ideas into reality and he did it through quiet thoughtful leadership and gentle guidance rather than an overbearing personality as is the case with a lot of ambitious people who get things done but fail to pay attention to fostering inclusive relationships. He was organised, meticulous in his research and kind in his dealings with people.
(v)              Phil the fantastic facilitator, inspirational in demonstrating a collaborative way of working together.
(vi)            Phil the unflappable …..in the face of we older CSIRO scientists’ cynicism about social learning through online collaborative platforms he helped lead us to wrest some science out of our apathy.’
(vii)          Phil the humourist.’ It was very subtle but always present. Like how he wrote that book chapter called 'a nexus of nexuses', he was kind of having fun with the whole thing but not making a big deal out of it’.
(viii)        Phil the ever positive - smiling and always looking for better ways of doing things.
(ix)            Phil the initiator and facilitator of good conversations: ‘he rounded up our team and whisked us off in search of some good coffee on campus and there we sat talking all things sometimes political, sometimes about what we were reading for pleasure, the ethics of food, and what our fellow colleagues were up to in the water governance space’
(x)              Phil the attentive supervisor, supporter and advisor always happy to discuss; caring, compassionate and consistent;
(xi)            Phil the technology pioneer and enabler: ‘Phil emailed a certain professor that a number of references were available on the cloud. To a distracted busy person who only half read the email, the idea of references on freshwater being in the cloud  made sense in a weird sort of way that did not have much to do with computing. After acknowledging mystification Phil patiently explained but sent all the files on email instead.’
(xii)          Phil the exemplar of doing systemic thinking as an everyday practice - as a way of shaping your thoughts as a web of ideas and views, which spurs you on to make further connections that helps you think in a more inclusive way’
(xiii)        Phil the work-life-balance manager – assiduous in his concerns for equity with his partner Beth, for the efficacy of their parenting team and his commitments to Archer and Hugo;
(xiv)        Phil - the loss to us all – ‘so much potential yet unused to make a difference.  And a beautiful spirit and intellect lost when so many that are bad and destructive go on and on.’

Phil would not have liked the fuss.  But at this moment all of these facets of Phil, as well as others not yet said, deserve a public saying and acknowledgment.

Let me finish by saying that in my experience Phil Wallis was an easy man to love.  When I say this I do not mean a Hollywood, romantic, version of love but the type of love that arises when we treat others, including nature with legitimacy.  Phil was an easy man to love because he made it so easy to reciprocate the legitimacy, the love, he granted each of us when we worked, collaborated, talked, facilitated, traveled, wrote, speculated and laughed together.  There was no humbug about Phil.  He was the real deal.  In our final conversation he counseled me to go on asking challenging questions.  This is an invitation I extend to you all on Phil’s behalf because we each contribute to the world that Archer, Hugo and others will inherit. Phil did more than his fair share; we owe it to him to continue his legacy. 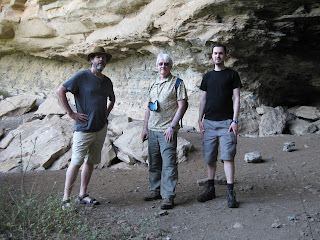 With Phil and John Colvin on a walk out from Montusi Mountain Lodge, the Drakensburgs, South Africa in 2012.
Posted by Ray at 4:51 pm No comments: