As this article from  Penny Sarchet describes the UK Cabinet Office is about to create six new 'What Works Centres' to assess whether ideas for new policies can work.  I do not know whether to be excited or appalled!  My inclination based on this article (and thus limited background appreciation) is the latter.  Why?  Well for a start these centres seem to be based on a particular paradigm of  what works and how what works might be assessed. And underpinning this a particular view of policy development and deployment suggests itself. I hope I am wrong. I also hope that one centre has systems thinking in practice capability and methodological skills.

Whilst I am all for strengthening the role that social science research plays it is a very broad church with myriad epistemological pitfalls - I wonder how the post will be described and the person chosen? And how will they practice in rleation to social science and other sciences? Might there be an opportunity to cultivate a reflexive, community of practice of chief scientists?


Around six institutes are being planned, which the government is calling What Works centres. The centres’ assessments will be used to inform decision-making in government departments. More details are expected by the end of February.

Research Fortnight has learned that the centres are to be modelled on the National Institute for Health and Clinical Excellence. NICE assesses evidence on the effectiveness of medical treatments and provides guidance to the National Health Service on whether these treatments should be purchased.

The Cabinet Office, which also houses the government’s Behavioural Insights team, is known to favour a NICE-type approach in other areas of government policy.

In 2011, the Cabinet Office announced in a white paper that the government would consult on how to establish credible accreditation bodies that would mirror the work of NICE in other areas of public services. It said that public services require “robust accreditation of what works”.

Leading social scientists have welcomed the news. David Hand, professor of statistics at Imperial College London, says: “It’s about time we put more effort into evidence-based social policy.”
Keiron Flanagan, lecturer in science and technology policy at the University of Manchester, adds that NICE-like bodies could be important for pointing out what he calls “dodgy” claims made by ministers about policies that are not supported by evidence. But the centres, which will not be directly testing new policies, would need good evidence to work with. “In many policy areas, there is not good evidence available,” he says.

Similarly, Mariana Mazzucato, professor at the University of Sussex’s Science and Technology Policy Unit SPRU, warns that external advice cannot substitute for a lack of expertise within government, something that she says the US is better at. “The Department of Energy is run by a Nobel [laureate],” she says. “Just as important as thinking about external ‘advice’ is the need to reinvigorate the status of government, so that it attracts the brightest young minds, and hence sector-specific expertise and talent.”

“Instead, what we have been witnessing in the UK is the downgrading of what government is seen to be able to do, and its budget to do it,” she adds.

In a related development, a long-awaited decision on the appointment of a government chief social scientist is thought to be imminent. The naming of such an adviser is expected to be among the first announcements that Mark Walport will make after becoming government chief scientific adviser in April.

Flanagan, however, says he has conflicting feelings about the possibility of a chief social scientist. “I would be reluctant to see social science separated out from natural and physical science, and I imagine that a chief social scientist would not have the clout of the chief scientific adviser. However, I don’t believe for a moment that the UK science lobby, who see the CSA not just as an adviser but as a champion for science in government, would ever accept a social scientist as government CSA.” "
Posted by Ray at 3:33 pm No comments:

What are we to make of the phenomenon of MOOCs?   I doubt anyone involved in Higher Education does not have a view.  There are the enthusiasts and the sceptics as a plethora of recent articles reveal e.g. The Crisis in Higher Education, by Nicholas Carr.  An example of the sceptic perspective is:

"The promoters of MOOCs have a “fairly naïve perception of what the analy­sis of large data sets allows,” says Timothy Burke, a history professor at Swarthmore College. He contends that distance education has historically fallen short of expectations not for technical reasons but, rather, because of “deep philosophical problems” with the model. He grants that online education may provide efficient training in computer programming and other fields characterized by well-established procedures that can be codified in software. But he argues that the essence of a college education lies in the subtle interplay between students and teachers that cannot be simulated by machines, no matter how sophisticated the programming."

It certainly seems true that most of the courses that have been presented to date do not involve what educators call epistemic learning.  In many ways the contestation is between learning and instruction, a point taken up rather elegantly by Nicholas Negroponte.

What neither article does is refer to the 40+ year history of The Open University (UK) in developing very effective pedagogic models to underpin large scale supported open learning courses.  Having now announced that it will take a leading role in a UK consortium (called FutureLearn Ltd) to deliver MOOCs I hope the experience of the OU will take the debate into new territory that has as its essence a pedagogy of personal and social transformation. After all that is what the world needs...and at scale. Or are we seeing a playing-out of the corporatisation of universities and with it the commodification of instruction (as I would not care to call it learning)?

'Research universities, which have little previous experience of online teaching, dominate the MOOCs offerings and this is evident in the outdated behaviourist pedagogy most in evidence. Most MOOCs are little more than OER with test material added.'
Posted by Ray at 2:45 pm No comments:

The illusion of certainty

Another good article by Ross Gittins appeared in The Age last week. In relation to the Australian Reserve Bank and its critics Gittins, in an article entitled ' Reserve Bank bursts bubble of certainty', observes:

"The other reason the Reserve has yet to get things badly wrong is that no one understands better than it how fallible its forecasts are - all forecasts, for that matter. And it's never afraid to admit its fallibility to the world."

"But if economic forecasts are so universally inaccurate, how come we hear so little about confidence intervals? It's partly because economists don't like advertising the considerable limitations of their art. They don't even like reminding themselves of their own fallibility." 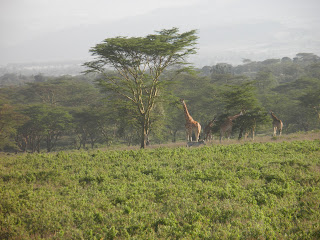 On my last night in Nairobi I went with friends to see a local movie 'Nairobi Half Life' which was excellent.  The movie itself, as well as the venue, seemed to me to hold all the contrasts that characterise Kenya today - elegance, poverty, violence, solidarity.

On our last morning at Lake Nakuru National Park we were alerted to a predator by the impala; scanning the vicinity I spotted a leopard jumping over a fallen tree. Later it wondered across the road in front of us in search of an impala kid.  In all we saw about 18 different species of mammal and countless birds. The lake is very full as my photos below show; not many of the flamingo for which the park is famous were present. My colleagues and I, though not experts, could not help but feel that the biology of the park was out of kilter.  We surmised that the absence of elephant was having negative effects on thorny acacia recruitment and, instead, favouring excess weedy species invasion as undergrowth.  This may have been exacerbated by a very heavy stocking rate of Cape Buffalo.

The park is also touted in most of the promotional literature as the site of some of the main Euphorbia forests in Kenya.  What these same web-sites do not mention is that almost none of this unique forest remains. I am still to find an explanation for the forest's disappearance.  Perhaps over grazing by black rhino, one of my Sth African colleagues suggested?

The research that took me to Kenya concerned how social and biophysical scientists were working together to address issues of food security and poverty alleviation. Historically these two groups of researchers have not always worked well together.  I now know much more about African Swine Fever - one of the projects of concern. I left impressed with the efforts being made. 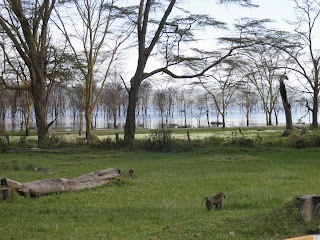 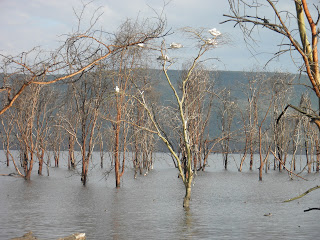 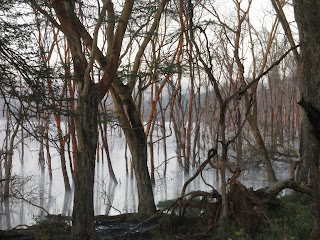 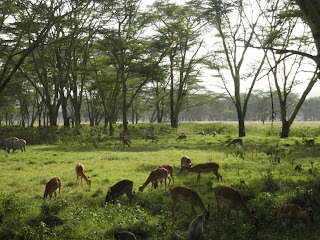 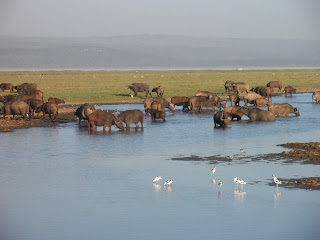 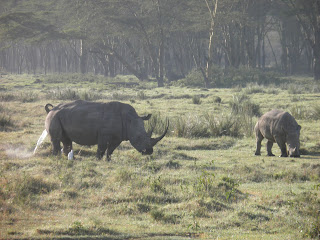 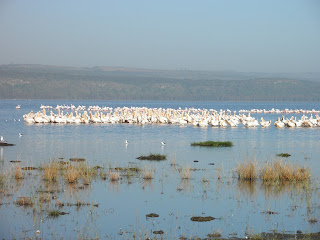 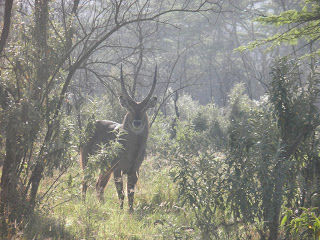 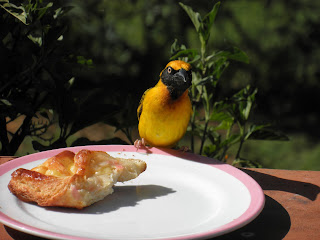 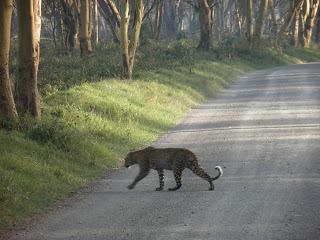 The ASC conference this year will be in Bolton UK from 28 July to 3 or 4 August, including pre and post conferences. Bolton is where Mass Observation originated.

Bolton is an old industrial town on the northern fringe of Manchester, UK, home of the Industrial Revolution and also of early British computing. It is near some of the most beautiful scenery and coast in the UK including the North Welsh coast and Anglesea Island, the Pennine mountains and the Lake District. The Scottish border is about an hour or so’s drive. It is wonderfully located for a holiday. Manchester is the real revival city in the UK and its international airport has good international connections including with the US. London is a 2 hour 10 minute train journey away.
Posted by Ray at 6:55 am No comments: