In 'After Capitalism' Geoff Mulgan argues that '.. the great depression was both a disaster and an accelerator of reform. It helped to usher in new economic and welfare policies in countries like New Zealand and Sweden that later became the mainstream across the developed world. In the US it led to banking reform, the New Deal and the GI Bill of Rights. In Britain depression, as much as war, led to the creation of the welfare state and the NHS.'

Although Mulgan does not say it - nor do many other politicians, least of all G20 leaders - the environmental crisis with climate change adapatation at the forefront, but by no means the only issue, ought to be recognised as THE primary accelerator of reform throughout the 21st century. Instead we have in Australia - and probably other areas of the world - a government committed to supporting and sustaining what are effectively 'sunset industries'. In his excellent, systemic analysis, Guy Pearce in the latest Quarterly Essay (No. 33) Quarry Vision: Coal, Climate Change and the End of the Resources Boom (Black Ink 2009) explains why this is so (see this review). For any one in need of convincing Pearce's essay reveals the extent of the systemic failure of our current governance arrangements. As I have blogged earlier, our governance arrangements can be understood as a 'structure determined system' which does what it is capable of doing - hence the 'capture of government' by the big carbon lobby. Unfortunately what we need at this historical moment is more than current governance arrangements seem capable of delivering.

Mulgan in his essay promotes the historical analysis of innovation cycles by Carlota Perez, a Venezuelan economist. He says: 'One implication of Perez’s work, and of Joseph Schumpeter’s before her, is that some of the old has to be swept away before the new can find its most successful forms. Propping up failing industries is in this light a risky policy.' Australian Labor seems well disposed to taking policies and practices (both good and bad) from UK Labour so let's hope that Senator Wong and PM Rudd take on board this advice from Geff Mulgan in respect to creating the conditions for transformation of our own economy and society.

Mulgan argues, following Perez, ' that we may be on the verge of another great period of institutional innovation and experiment that will lead to new compromises between the claims of capital and the claims of society and of nature. In retrospect these periodic accommodations are as integral to capitalism as financial crises—indeed it’s only through crisis and institutional reform that capitalism adapts to a changing environment and rediscovers the moral compass that is so vital for markets to work well. ' Thus, the key to transformation, it appears, is in the creation of new institutional forms. I would also argue it involves understanding existing institutional complexity and how institutional innovation exacerbates, or not, systemic complexity including increased transaction costs. Unfortunately Australia is not well endowed with institutional economists nor does government appear to have well developed policies or research in place to address the institutional reform that is warranted!
Posted by Ray at 5:41 pm No comments: 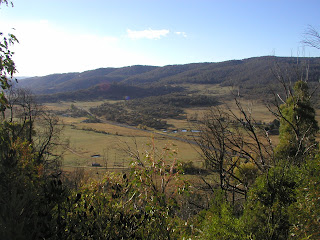 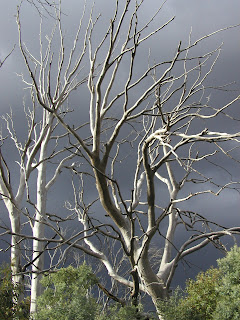 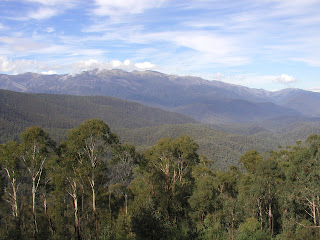 Australia has a mountain range

Until our Easter travels took us from the upper Murray across to Khancobin and thence to Thredbo and Jindabyne I did not really feel that Australia could claim to have a 'proper' mountain range - rather an elevated tableland. This view (final photo below) from Scammell's Spar lookout has made me change my mind.

Storms across the Snowy Mountains gave rise to nostalgic smells (as only rain in Australia can) and great variations in light.
Posted by Ray at 5:02 pm No comments:

Email ThisBlogThis!Share to TwitterShare to FacebookShare to Pinterest
Economics, economists and differing perspectives

A few friends and colleagues have been politely (thus far) taking me to task for some of my postings about the role of economics, and thus certain types of economists, in relation to contemporary crises (notably the financial one, but more importantly the environmental one). It has been pointed out to me that as I write economics (or more correctly John Geanakoplos, of Yale University) is contributing fundamentally important new ideas. Time will undoubtedly tell how fundamental and important this new idea is. But contrast this perspective with that of Anatole Kaletsky (editor-at-large of The Times and Chief Economist of GaveKai Research).

His article in Prospect was reproduced in the Financial Review yesterday under the banner ' Never let the facts get in the way of a good economic theory'. Kaletsky opens by making the point that by today's standards Adam Smith, Keynes, Ricardo and Schumpeter would not be regarded as economists and certainly would not be published in top ranking economics journals. He suggests that if any applied for a top post at a University today they would almost certainly be rejected.

In relation to the financial crisis he goes on to say:

'But in general how many academic economists have had something useful to say about the greatest upheaval in 70 years? The truth is even worse than this rhetorical question suggests: not only have economists, as a profession, failed to guide the world out of the crisis, they were also primarily responsible for leading us into it.'

Kaletsky has a strong critique of the focus that has emerged in 'mainstream economics' on quantification, forecasting and predicting, arguing that:

'economics should recognise that, as a discipline, it cannot be about predicting, but is instead about explaining and describing.'

The failure, and thus complicty of academic economists in the financial crisis, began, he argues, in the 1970s 'about “rational” investors and “efficient” markets'. .......And on those two reassuring adjectives, rational and efficient, the victorious academic economists erected an enormous scaffolding of theoretical models, regulatory prescriptions and computer simulations which allowed the practical bankers and politicians to build the towers of bad debt and bad policy.'

'So what is to be done?' he asks: 'There are two options. Either economics has to be abandoned as an academic discipline, becoming a mere appendage to the collection of industrial and social statistics. Or it must undergo an intellectual revolution. The dominant research programmes must be recognised as failures and instead of using oversimplified assumptions to create mathematical models that purport to give precise numerical conclusions, economists must re-open their subject to a range of speculative approaches, drawing insights from history, psychology and sociology, and applying the methods of historians, political theorists and even journalists, not just mathematicians and statisticians. At the same time, they must limit their ambitions to explaining only what the tools of economics allow you to understand.'

He thus argues the need for more heterodox approaches, something sadly lacking in Australia, because:

'they reject the ideological orthodoxies of rational expectations and efficient markets and the equally stifling methodological demand that economic insights must be expressed in mathematical formulae.'

My motivation in making the postings I have about the role of economics in our contemporary world is grounded in my own experience. From this experience I could not have expressed a better conclusion than Kaletsky's that:

'Economics today is a discipline that must either die or undergo a paradigm shift—to make itself both more broadminded, and more modest. It must broaden its horizons to recognise the insights of other social sciences and historical studies and it must return to its roots. Smith, Keynes, Hayek, Schumpeter and all the other truly great economists were interested in economic reality. They studied real human behaviour in markets that actually existed. Their insights came from historical knowledge, psychological intuition and political understanding. Their analytical tools were words, not mathematics. They persuaded with eloquence, not just formal logic. One can see why many of today’s academics may fear such a return of economics to its roots.'
Posted by Ray at 3:00 pm No comments: 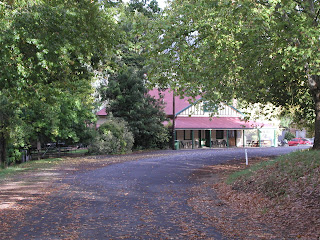 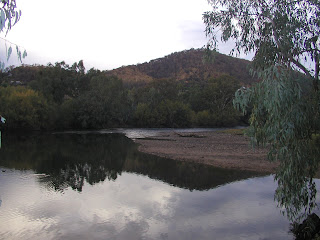 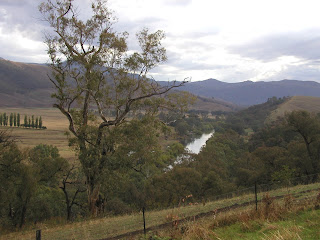 Easter travels and the state of the countryside

We left Melbourne on Good Friday travelling north up the Hume Highway to Beechworth and thence to Jingellic on the upper Murray. The countryside is very dry and in many cases I have never seen paddocks so overgrazed. Other places seem to have been destocked and look better. Many of the stock are in poor condition so close to winter. Lake Hume (a major dam on the Murray River) was not to be seen - essentially empty from our vantage points. On the bright side as we headed over the range through Mt Granya State Park we had a cloudburst that made driving difficult, but was none-the-less very welcome rainfall. The rain continued on into the evening but I am not sure how widespread it was. Despite the poor season the Murray Vallley had many scenic turns.

We spent a very comfortable first night at the Jingellic pub (pictured) and admired the variety of birds on walks along side the Murray.
Posted by Ray at 9:42 am No comments: