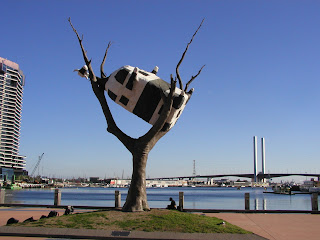 Earlier this year I was somewhat taken aback when I encountered once again by happenstance John Kelly's 'Cow up a Tree'. This time I spotted it from the free tram that does a circuit of central Melbourne and the nearby Docklands area (see picture). The first time had been in the Avenue des Champs Elysees in Paris during the 1999 Paris Biennial. On that occasion we - my colleagues from the LEARNing Group - were taken by the work because we thought it evoked in metaphorically stark terms the uncertain future that agriculture in the Western world (industrialised agriculture) faced. We approached John Kelly and with his permission included it as a frontispiece in the book we were then developing....and we called the book Cow up a Tree. Knowing and Learning for Change in Agriculture. Case Studies from Industrialised Countries.

Philip Hopkins' editor in the Business Age (February 3, 2007) must have seen in Kelly's work similar metaphorical possibilities to ours when he used an image of it to back Hopkins' article 'High & Dry...Farmers are changing their approach to greenhouse gases and climate change, but the key issue on the land is water..' Philip's article was timely ... in hind sight it was at about the time of the great tipping point in Australian politics - the time when the coalition Government began to outwardly acknowledge that climate change was real. Since then however much of the coalition's rhetoric and pronouncements have rather left them like this proverbial cow!

It is worth considering the points that Philip made in his article (reproduced with permission):

'IT WAS a watershed week for Australian agriculture: Malcolm Turnbull was anointed as the new Minister for Environment and Water Resources, and the latest official United Nations report ramped up the fears about global warming.

The two events have enormous importance for agriculture, already struggling from drought and now facing the prospects of a future with less rain if rising greenhouse gas emissions (GHGs) warm the planet.

It's Turnbull's job to fix the water supply and irrigation issues in the nation's food basket, the Murray-Darling Basin, and farmers know the score on climate change.

The National Farmers Federation clearly stated in its pre-budget submission to the Federal Government: "Climate change is possibly the biggest risk facing Australian farmers now and into the future."

Agricultural scientists agree. "There is no doubt that we must take action to reduce greenhouse gas emissions, but of course with plenty of debate about just how, and how quickly," says Dr David Smith, a former director-general of agriculture with the Victorian Government and a leading agricultural expert.

Agriculture has its own greenhouse issues to deal with. In 2004, agriculture pumped out 93.1 million tonnes of carbon dioxide, the main green-house gas - about 17 per cent of Australia's national emissions, according to the Australian Greenhouse Office. But its greenhouse output was only 2 per cent higher than in 1990, the base year of the Kyoto Protocol.

Farmers, particularly those in Queensland, have faced fierce criticism over land clearing. In 1990, land clearing and forestry accounted for 23.5 per cent of national emissions, but 14 years later, that was down to only 6.3 per cent - a fall of 73 per cent.

A study by Allen Consulting for the NFF identified agriculture's key greenhouse outputs - methane from farting cattle, which make up 11.4 per cent of national emissions, and soil cultivation, particularly the use of fertilisers. However, the difficulty in accurately measuring agriculture's GHGs means the sector will probably never be subject to caps and any emissions trading system.

The author of the Allen report, Brett Janissen, says the European Union has no plans to impose controls on farm GHGs in its emissions trading system. It's a similar tale in New Zealand, where a proposal for a fart tax on cattle was dropped after farmer rage.
Besides, Janissen says "where dollars are attached to emissions", greater accuracy is required than in Australia's national greenhouse gas inventory. Nevertheless, an ability to supply emission offsets is also a potential money earner for agriculture. "Emission offsets . . . represent a vehicle for voluntary participation in the trading system," he says.
Greenhouse sinks are also possible new income sources - farm forestry, through sequestration of carbon in the trees, and land-based sequestration such as saltbush planting.
Janissen says farmers will not be immune from green-house costs. The focus on energy is bound to raise electricity prices, affecting the price of goods used on the farm, such as machinery, power and fuel.

David Smith is adamant that Australian agriculture can deal with greenhouse issues and climate change. Smith, 78, an author, farmer and shire councillor who has worked with the World Bank in Africa, emphasises the need for proper research.

Regarding methane emissions from cattle, "there's a fair amount of research going on forage crops", he says. "When they're eaten by the animal, they give off less methane. Another aspect of this is having different micro-organisms feeding into the gut of the animal so it doesn't make the same amount of methane and fart outcome."

For Smith, soil enrichment is not just one of Australian agriculture's great successes, it will help fight climate change and act as a greenhouse sink.

"We're not beating hell out of the soil with tillage like Europe is doing," he says. "No till" and "direct drilling" - where seeds are direct drilled and soil impact is minimised - help retain moisture. "Since 1970 we have broadly more than doubled our efficiency of water use in crop lands," he says. Less tillage saves fuel from machines - a big source of carbon dioxide.

Dr Vanessa Findlay, head of natural resources management at the NFF, says by moving from tillage to minimum or no tillage, "you increase the carbon storage in the soil". "It's quite difficult to put the carbon back in the soil and it's easily lost. It's a difficult process to include in any emissions trading or carbon credit scheme," she says. "But that's not to say the potential for soil carbon in the overall scheme of dealing with climate change is not huge, because it is."
Smith believes the role of trees on farms in fighting climate change is exaggerated. "There are still some windswept farms, but generally speaking, Landcare has done a lot of good. We are not in bad balance these days," he says.

Findlay, who says the NFF wants farm forestry emphasised in the Government's plan to treble plantations by 2020, is more upbeat about the green-house sink possibilities of deep-rooted perennial grasses. "They are associated with no-till practices and cover a whole range of grasses particular to the area the farm is in," she says. Another option is legume plants, such as peas, pulses and beans. "They are an organic source of nitrogen for the soil. That's part of maximising the carbon in your soil when you undertake no-till practices," she says.

Bioenergy, such as an increased use of ethanol on the farm and by motorists, is another potential greenhouse-plus, but it's a tough one for the NFF. Livestock producers who use grain in feedlots see the risk of increased demand lowering supplies and pushing up prices, but grain producers see the chance of new markets.

Water remains the key problem. Turnbull's brief is to find a solution to the water allocation and irrigation problems in the Murray Darling. Further south and west, the non-irrigated cropping areas were defined in the 19th century by the "Goyder line", which marked the point beyond which rainfall was too unreliable for agriculture.

"In the last few decades, as we have moved into more efficient moisture management, we have effectively moved the Goyder line further north," says Smith. A study of Andrew Polkinghorne's property at Lock, right on the Goyder line in South Australia, showed that wheat yields have doubled since 1970. "This is extremely good moisture management, which I think has been the triumph of the last 30 years in grain farming . . . It (the Goyder line) may be coming back south again, but it's hard to tell," he says.

Smith says Goyder made his assessment on the technology of his time. "The boundaries of wheat farming - well, you find out by wheat farming . . . by doing it," he says.
This will be the test if climate change does bite. "If an area for several seasons doesn't give you a reasonable return, your boundaries will move back," he says. "It (agriculture) must be adaptive and well supported by good science. It's not just stupid people blundering around in the dark. But there are time lags between identification and adaptation."

A rainfall map of Nagambie, a representative site in central Victoria, shows clearly that average rainfall was greater in the second half of the 20th century than the first. The current dry spell has still not reached the depths of the 1940s, but there are indications that the century's dry first half may be returning. "If this is the norm, we are in deep trouble. Forget even global warming for a minute," Smith says.

Recycling sewage or waste water for agriculture is only in its infancy, but Smith says it's much more preferable than recycling sewage for drinking water. "Your sewage water is loaded with nutrients - phosphorous and nitrogen. I'd far rather see that water used in agriculture using it as nutrient, selling as fertilised water," he says.
Findlay agrees. "With the community 'yuck' factor associated with drinking recycled water, the opportunity to use it for agriculture is high," she says.

Findlay says there is talk of putting in pipelines to take water from rural areas to urban towns short of water. "The same opportunity is there to use the same pipelines to reverse it and send recycled water back the other way. You would put in a dual system," she says. "Big rural towns create a lot of sewage. It doesn't make a lot of sense in a country as dry as Australia - this has nothing to do with climate change, although climate change is likely to enhance it - to use the water only once. It just seems crazy."

Phillip's article raises many relevant issues. I wonder for example how the NFF claim that climate change is farmer's biggest risk sits, within the coalition, alongside Howard's ongoing support for the coal industry and other big emitters? On the other hand the article accepts too many assertions uncritically, in that several proposals being argued have systemic flaws - this is in fact a major theme addressed in various case studies in the 'Cow up a Tree' book. Some of these include:
1. The implicit acknowledgement that feed-lotting should continue - it is a biologically inefficient industry and future climate change policy should create the circumstances for its demise;
2. The lack of mention of the water required to produce different agricultural products - it is far higher for livestock than for plant production - something like 2300l of water embedded in one large hamburger;
3. The tendency still to seek magic bullet solutions - non-farting animals or grazing plants that reduce farting - long shots that are unlikely ever to bring outcomes at the level of the herd or whole farm enterprise;
4. Lack of recognition that with climate change, particularly in southern Australia, uncertainty and associated climate variability may be exacerbated thus making long-term financial viability of many dryland farming enterprises more problematic;
5. Little mention of climate change also threatening irrigation areas and intensifying conflicts over the use of water, particularly between production and environment;

Lets hope that a few more people have the same sensibilities as Philip Hopkin's editor and realise that with thinking as usual we become the cow up the tree!
Posted by Ray at 12:45 pm No comments: