News from the Systems Dynamics Society.

"The International Conference of the System Dynamics Society is your opportunity to explore what is possible with the tools of System Dynamics and to get to know leaders and experts active in the field.

I’m very glad I came to the System Dynamics Society conference because I thoroughly enjoyed it. The conference (and the welcoming community) has really opened me up to the SD field. - Sara Chung, conference participant.
Join us at Delft University of Technology in Delft, Netherlands, July 17-21 for our 34th annual educational and collaborative conference as we share advances and insights in System Dynamics. The conference will provide attendees with opportunities to share research, get feedback, see what others are doing in the field, and meet new collaborators. The conference theme is “Black Swans and Black Lies: System Dynamics in the Context of Randomness and Political Power-play.”

The conference will start with the PhD Colloquium on Sunday, July 17 and continues through Workshop Day on Thursday, July 21. Visit the conference website to see a preview the Draft Program Overview by Thread.

Boost your modeling skills by attending the 3rd annual System Dynamics Summer School. Held at the conference venue July 13-15, the Summer School will increase your knowledge and help you integrate the offerings of the conference.

Don’t miss out – register today! We look forward to seeing you in July!

Some of the more formative experiences of my early academic career happened in Tanzania - in late 1980 and early 1981.  My role, whilst still a PhD student at the University of Queensland, involved setting up, and then 'tutoring', in an FAO sponsored training program in tropical forages and rangelands management.  From memory the participants came from Southern Sudan, Somalia as well as the main East African countries as far south as Zambia.  To get to Tanzania from Brisbane in those days involved flying via Athens where SAS flew to Dar via Jeddah. On the second of these visits with some colleagues we managed a short visit to Arusha, Lake Manyara National Park and Ngorongoro Crater.  The vistas from the crater towards the Serengeti were magnificent and significant enough to instil a desire to return and explore more.  Some 35 years later, due to work I was invited to do with WWF, the opportunity to visit the Serengeti and Tarangire Parks for the first time, and revisit Manyara and Ngorongoro arose.

There is much that could be said about this visit within a 'systemic musings'  framing.  In this first postcard I want to comment on my experience of the wildebeest migration which, when experienced at first hand, forces one to understand it as one of the great wonders of the world: it is claimed that "while having the appearance of a frenzy, recent research has shown a herd of wildebeest possesses what is known as a "swarm intelligence", whereby the animals systematically explore and overcome [an] obstacle as one."

Others have written about this phenomenon in prose more eloquent than mine but perhaps what might be missing from these accounts is the essentially systemic nature of the migration process, a process that involves mainly one species (though zebra are also part of the process) walking/running over large distances in an eternally iterative process....or at least thus far.   Of course walking as a phenomenon arises in the systemic relations between two 'systems' - a living organism (i.e., wildebeest or zebra) and a medium, in this case the vast tracks of savanna grassland that extend from Kenya into northern Tanzania. In other words it is not just the wildebeest, but the land that they must traverse that generates the phenomenon that is so spectacular.  The so-called 'Serengeti ecosystem' spans approximately 30,000 km2. 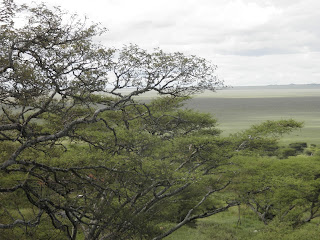 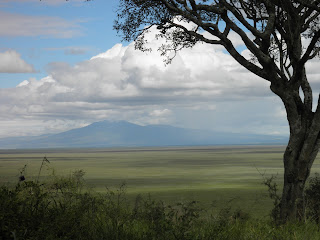 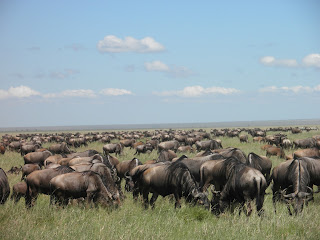 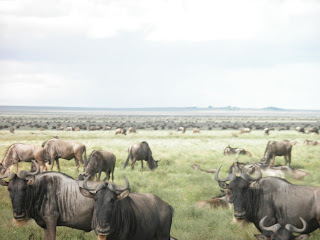 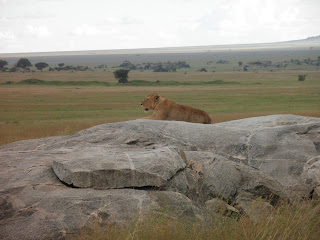 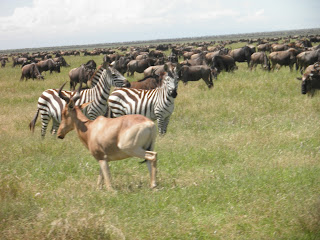 The continued functioning of the wildebeest migration comes about through early activism that led to the creation of the Serengeti National Park in 1951 and a contiguous set of Conservation Areas.  As I understand it the Maasai who historically lived relatively harmoniously with the native animals (i.e., they are not hunters, but herders) were excluded from traditional lands by the creation of the park, a situation that continues today. Maasai are not, however, excluded from the Conservation Areas, such as The Ngorongoro Conservation Area.  Conflict over rights to land persist (though tensions have eased since the election of a new President beginning in 2016). 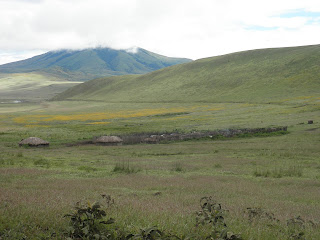