From Nagambie to the land of the Fib Dems

The wetlands and billabongs around Nagambie, about 2 hours drive from Melbourne are awash and brimming with life. Australia is in the midst of a La Nina event and much of the landscape in south-eastern Australia is awash in spectacular, peculiarly Australian, ways (see these Wolf spiders for example).   The bird life is spectacular as we found out on a recent week-end in the locality - red-capped robins are particularly appealing. 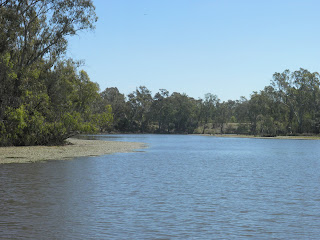 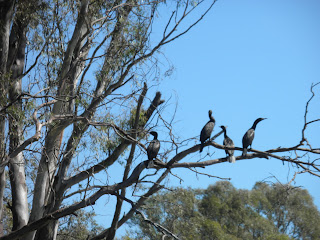 In contrast England is experiencing a severe drought. There have already been crisis meetings amongst the main agencies and water companies. Fears for the summer are high. 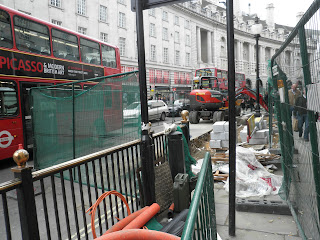 London, striving to be Olympics ready, is pock marked with building activity.  The merchants of Regent St clearly anticipate a retail bonanza as many of the shops are undergoing major makeovers.  My Cockney cabbie preferred Boris to Ken in the mayoral stakes.  The bike riders are thicker than ever but accidents seem closer to hand. Compulsory road tax and insurance for bikers was my cabbie's policy prescription. 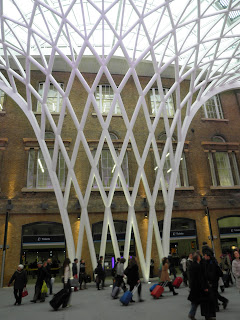 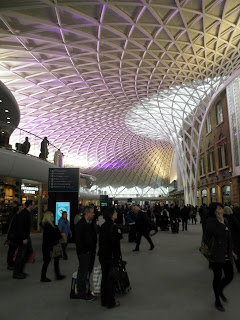 The new roof (or vest) at King's Cross Station is spectacular - surely now worth more then 200 Monopoly pounds! Though it was a little cool having our afternoon tea.

Steve Hilton, close friend and advisor to British PM, David Cameron is taking leave of the Civil Service and thus his championing of the 'Big Society' project.  Some reports make it clear that he was frustrated at his inability to push through reforms and public sector intransigence. Others are pleased at his departure!

The headlines upon my arrival seemed to suggest a government that had taken leave of its senses.  Road privatisation was on the agenda - was nothing learnt from the failures of rail privatisation? A two tier pay system was being proposed for civil servants in the north and south - clearly no one had explored the systemic implications of such a policy!  Who will ever vote for the Lib Dems (rebranded Fib Dems) again?

On the other hand the spring flowers were as enchanting as ever and the weather glorious.
Posted by Ray at 4:08 pm No comments:

In the New York Review of Books Bill McKibben reviews three important accounts of fracking including Josh Fox's documentary, 'Gaslands'. He gives a balanced overview but the final message is, for me, still one of despair.  He notes that:

'The rush to exploit 'extreme energy', and to rip the planet apart to get at it, knows no national boundaries.  Urbina reported last year that the big energy companies have spread the fracking technology around the planet finding new shale deposits in more than thirty countries.'

Regulators are in no position to keep up.  Thankfully in Australia we are now begining to see positive effects from concerted opposition.  It remains to be seen what position the new coalition government in Queensland will take.
Posted by Ray at 3:57 pm No comments:

Systemic approaches to education and the legacy of John Dewey

Schooling and university education are being debated across the world - it is a hot topic in Australia, the UK the USA etc..  It never ceases to amaze me how so many commentators, politicians and civil servants (i) generalise from their  own limited experience; (ii) trust the big consulting firms to deliver effective innovations (rather than repeat business); (iii) fail to learn from history and (iv) have no, or limited, appreciation of how learning operates.  Given my own experiences of three major Higher Education (HE) learning systems (traditional, didactic; student centred, experiential learning; student-centred supported open learning) it was thus pleasing to read a two-part series 'Schools we can Envy' and 'How, and How Not, to Improve the Schools' by Diane Ravitch in the New York Review of Books.

In particular I like Pasi Sahlberg's acronym 'GERM' as it is so fitting a description and metaphor for what is happening in the UK and Australia.  This extract explains the main points:

"Like George W. Bush’s No Child Left Behind, Barack Obama’s Race to the Top program is part of what Pasi Sahlberg calls “the Global Education Reform Movement,” or GERM. GERM demands teaching to the test. GERM assumes that students must be constantly tested, and that the results of these tests are the most important measures and outcomes of education. The scores can be used not only to grade the quality of every school, but to punish or reward students, teachers, principals, and schools. Those at the top of the education system, the elected officials and leaders who make the rules, create the budgets, and allocate resources, are never accountable for the consequences of their decisions. GERM assumes that people who work in schools need carrots and sticks to persuade (or compel) them to do their best.

In Finland, the subject of the first part of this article,1 teachers work collaboratively with other members of the school staff; they are not “held accountable” by standardized test scores because there are none. Teachers devise their own tests, to inform them about their students’ progress and needs. They do their best because it is their professional responsibility. Like other professionals, as Pasi Sahlberg shows in his book Finnish Lessons, Finnish teachers are driven by a sense of intrinsic motivation, not by the hope of a bonus or the fear of being fired. Intrinsic motivation is also what they seek to instill in their students. In the absence of standardized testing by which to compare their students and their schools, teachers must develop, appeal to, and rely on their students’ interest in learning."

The irony is that theoretically what Finland does takes much of its inspiration from the work of American John Dewey, who was also a great influence on Systems scholars like Russ Ackoff and West Churchman.  The GERM countries would do well to revisit John Dewey in their policy formulations.  Unfortunately this would require a major policy about-face as the key starting point.  A contemporary Deweian approach  needs re-recognition that education is a public good - an investment in a society - rather than a private good equipping the individual to compete in a mythical market. I do not see GERM politicians championing such a strategy.  Not even the UK Fib Dems had the courage of their convictions when it came to the crunch.