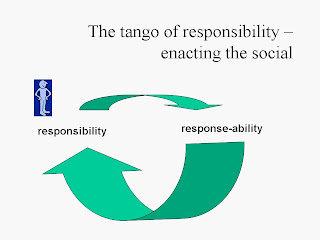 The duality of responsibility and response-ability: lessons from Gerard Fairtlough's last book

We live in a world where leaders and bureaucrats seem increasingly preoccupied with 'behaviour change'. All too often though the discourse is about changing someone else's behaviour without consideration of the ethical dimensions of their actions. Nor do they seem aware of the responsibility/response-ability duality. In a climate-change world this is unfortunate. What is sought is that individual citizens take more responsibility - what is not realised is that the circumstances for response-ability need to be created as part of the same process i.e responsibilty and response-ability together form a whole.

Creating the circumstances for response-ability often involves some form of organisational change (given so much of our life is spent within an organisation or in inter-organisational transactions). In his book ‘The Three Ways of Getting Things Done’, the late Gerard Fairtlough, based on his extensive experience of organisational life, argued that ‘sustainable organizational change can only take place in a non-hierarchical manner. Imposed change, which ignores the need for learning and overrides personal values, cannot work for long. Worthwhile change only emerges from reflective practice and has to be fully embraced by all concerned. (p. 83, 2007). He proposes that there are ‘three and only three, fundamental ways of getting things done: hierarchy, heterarchy and responsible autonomy’. I outline what he means by these terms below where I also contrast them with John Heron's three types of power in decision making. I find them remarkably compatible.

Hierarchy is captured in a classical organogram – it usually starts with a single supreme ruler, e.g. a CEO who passes authority onto a series of lesser rulers.

Heterarchy means ‘multiple rule’ and is thus concerned with a balance of powers rather than the single rule of hierarchy (e.g. a legal firm partnership).

Deciding for … a hierarchical form of power

Deciding with ……a heterarchical form of power

Delegating deciding to ….a responsible autonomy form of power.

Although Gerard's terms may be unfamiliar to many his book is easy to read and his ideas are easy to grasp. The reader should expect to grasp the framework of ideas, but not an exhaustive set of 'how to'. The challenge he leaves those who accept his arguments is to invent 'how to' for current circumstances. In a climate-change world we need to understand processes of co-evolution which are best 'managed' through heterarchical and responsible autonomy modes of practice.

He makes a good point which speaks to my own experience when he says the advantages particular to autonomy are the 'removal of delays and distortions that occur when a large organization tries to control everything from the centre. '

Gerard suggests that the time is ripe to abandon hierarchy...'there is a mass of evidence to suggest that, in the twenty-first century, the time is ripe for sustainable change in the methods organizations use to get things done. This will probably result in continuing moves away from hierarchy in organizations.' (p. 82) I hope he is right - it would be a great legacy.
Posted by Ray at 11:56 am No comments: